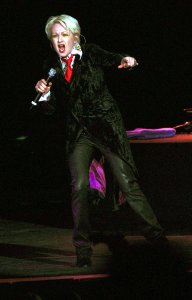 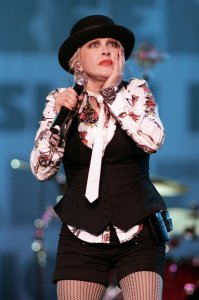 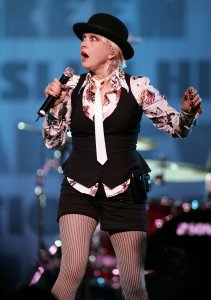 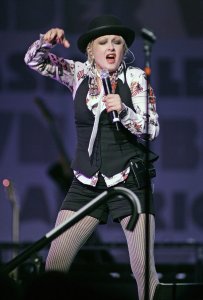 Entertainment News // 9 months ago
Hall of Fame songwriter Allee Willis, co-writer of 'Friends' theme, dies at 72
Songwriter Allee Willis, whose extensive portfolio includes the theme song for the television show Friends and disco-era hits by Earth, WInd & Fire, has died, her partner said Wednesday. She was 72.

TV // 1 year ago
Jane Lynch announces new Netflix series, compares it to 'Golden Girls'
Jane Lynch has announced that herself and singer Cyndi Lauper are set to star in a new Netflix comedy series that she compared to "The Golden Girls."

I wanted to do stuff with energy and rhythm, so I reached out to the dance community and find good people to work with

I wanted to go back to making music with energy again

Cynthia Ann Stephanie "Cyndi" Lauper (born June 22, 1953) is an American singer-songwriter and actress. She achieved success in the mid-1980s with the release of the album She's So Unusual and became the first female singer to have four top-five singles released from one album. Lauper has released 11 albums and over 40 singles, and as of 2008 had sold more than 30 million records worldwide.

The daughter of Fred and Catrine Lauper, Cyndi Lauper was born and raised in Ozone Park, in the borough of Queens in the city of New York, New York. Her mother uses the stage name, "Catrine Dominique" for the music videos in which she has appeared. Her father was of German and Swiss descent and her mother is Italian American (from Sicily). She has an older sister, Ellen, and a younger brother, Fred (nicknamed Butch). Lauper's mother remarried, divorced again, and went to work as a waitress. It was during this time that Lauper began listening to artists like Judy Garland, Billie Holiday, Ella Fitzgerald, and the Beatles. Her mother encouraged her independence and creativity. At the age of twelve, Lauper learned how to play an acoustic guitar, which her sister had given her, and she started to write her own lyrics. She had a great love of art and music and tried to find ways to express herself. Even at this early age, Lauper started dyeing her hair different colors and wearing radical fashions. Lauper was accepted in a special public high school for students with talent in the visual arts, but she was held back and eventually dropped out, earning her GED sometime later. At the age of seventeen, she left home, planning to study art. Her journey would take her to Canada, where she spent two weeks in the woods with her dog, Sparkle, trying to find herself. She eventually wound up in Vermont, where she took art classes at Johnson State College. She supported herself by working at various odd jobs.

In the mid 1970s, Lauper performed as a vocalist with various cover bands (such as Doc West and Flyer, who still perform under the names Gap Wilson Band and Red, White and Blues Band), in the New York metropolitan area, singing hits by bands such as Jefferson Airplane, Led Zeppelin, and Bad Company. Even though Lauper was now performing on stage, she was not happy singing cover songs. In 1977, Lauper damaged her vocal cords and took a year off. She was told by three doctors that she would never sing again. Vocal coach Katie Agresta helped Lauper regain her voice by teaching her proper vocal exercises.

FULL ARTICLE AT WIKIPEDIA.ORG
This article is licensed under the GNU Free Documentation License.
It uses material from the Wikipedia article "Cyndi Lauper."
Back to Article
/