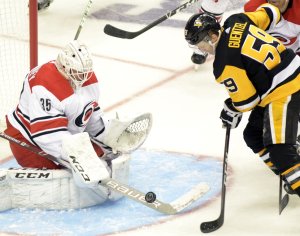 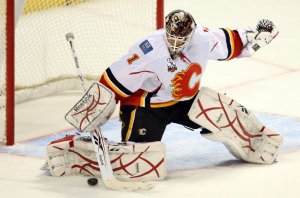 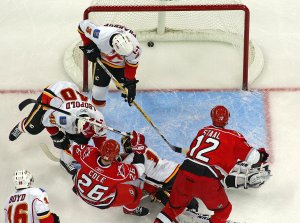 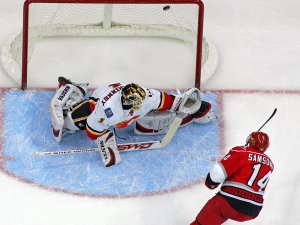 NHL // 3 years ago
McElhinney, Hurricanes host Ducks
RALEIGH, N.C. -- Just days before the season began, Curtis McElhinney wasn't even in the conversation about the Carolina Hurricanes.

Robert Curtis McElhinney (born May 23, 1983 in London, Ontario) is a Canadian professional ice hockey player. McElhinney is a goaltender for the Ottawa Senators of the National Hockey League (NHL). McElhinney was a sixth-round selection of the Flames, 176th overall, at the 2002 NHL Entry Draft. McElhinney made his NHL debut in the 2007–08 season.

McElhinney played four years of university hockey for Colorado College, compiling a 62–15–8 record in that time en route to winning two Western Collegiate Hockey Association First All-Star Team selections in 2003 and 2005, as well as NCAA Second and First All-American Team selections in 2003 and 2005, respectively. He was selected 176th overall by the Calgary Flames in the 2002 NHL Entry Draft.

He made his professional debut in 2005–06 with the Omaha Ak-Sar-Ben Knights of the American Hockey League (AHL). He tied for the AHL lead in shutouts in 2006–07 while setting an Omaha team record with 44 wins. He played in the 2007 AHL All-Star game, and was named to the AHL Second All-Star Team.

FULL ARTICLE AT WIKIPEDIA.ORG
This article is licensed under the GNU Free Documentation License.
It uses material from the Wikipedia article "Curtis McElhinney."