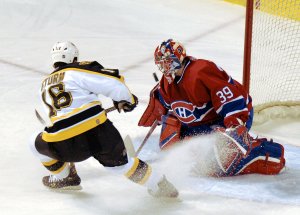 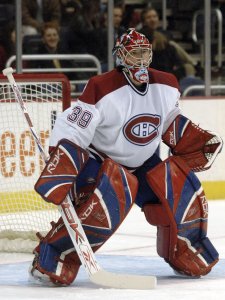 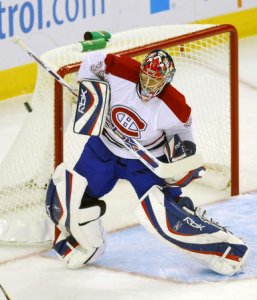 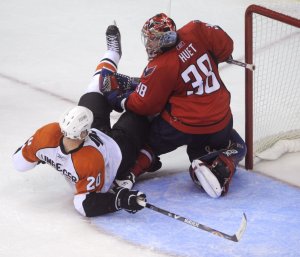 Cristobal Huet (French pronunciation: ; born September 3, 1975) is a French professional ice hockey goaltender currently playing for the Chicago Blackhawks of the National Hockey League (NHL). He developed his goaltending skills in Grenoble with Les Brûleurs de Loups. He has also played with the Los Angeles Kings, Montreal Canadiens, and Washington Capitals. He is the first netminder and second player overall (after Philippe Bozon) from France to play in the NHL. Huet won the Stanley Cup with the Blackhawks during the 2009-10 NHL season. He was the first Frenchman to win the Stanley Cup as a player.

Huet was drafted by the Los Angeles Kings as their seventh-round pick, 214th overall, in the 2001 NHL Entry Draft. He played for the Kings in the 2002–2003 and 2003–2004 seasons. He was traded to the Montreal Canadiens in a three-team deal that sent Mathieu Garon to Los Angeles and Radek Bonk from the Ottawa Senators to Montreal. During the lockout Huet played for the Mannheim Eagles in the Deutsche Eishockey Liga. He led the team to the finals, where the Eagles lost in three straight games to Eisbären Berlin.

During the 2005–06 season, Huet eventually won the starting job in goal for the Canadiens at the expense of José Théodore who was subsequently traded to Colorado in exchange for goaltender David Aebischer. He also won the Molson Cup in February 2006. The Molson Cup is awarded monthly to the best Montreal Canadiens' player. He won the Best Defensive Player award from the NHL during the first week of March, ousting goaltenders such as the Ottawa Senators' Ray Emery and the New Jersey Devils' Martin Brodeur, with a 3–0–0 record and a 1.67 GAA. For the second time of the year, he was named NHL Best Defensive Player on April 3 with a 3–0–0 record, a 0.65 GAA and 0.979 SV%, ousting goaltenders Martin Brodeur, Miikka Kiprusoff and Manny Legace.

FULL ARTICLE AT WIKIPEDIA.ORG
This article is licensed under the GNU Free Documentation License.
It uses material from the Wikipedia article "Cristobal Huet."
Back to Article
/