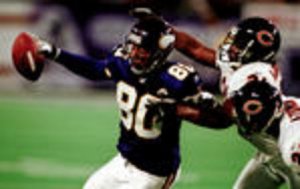 NFL // 3 years ago
Teammates see Arizona Cardinals' David Johnson as MVP candidate
There are several deserving candidates up for the NFL's Most Valuable Player award this season.

Sports News // 3 years ago
Instead of giving K Blair Walsh the boot, Minnesota Vikings give him reprieve
EDEN PRAIRIE, Minn. -- Based on the about-face the Minnesota Vikings pulled off on Wednesday, they should run a reverse on the first play of their game.

Sports News // 4 years ago
End came too soon for Ravens WR Steve Smith
OWINGS MILLS, Md. - The biggest challenge facing the Baltimore Ravens for the rest of the season is how to adjust to the season-ending injury to Steve Smith Sr.

Sports News // 4 years ago
Cris Carter apologizes for remarks to rookies
In his first television appearance since his controversial remarks came to light over the weekend, ESPN analyst Cris Carter on Monday apologized for telling rookies they should have a "fall guy" when they get in trouble.

Sports News // 4 years ago
Josh Gordon pens open letter to critics: You have no idea what you're talking about
Josh Gordon offered harsh words for his critics in an "open letter" condemning those who cast judgement on him without knowledge of his life outside football.

After starring for the Ohio State University Buckeyes, Carter was drafted by the Eagles in the 4th round of the 1987 NFL supplemental draft. While in Philadelphia, head coach Buddy Ryan helped to coin one of ESPN's Chris Berman's famous quotes about Carter: "All he does is catch touchdowns." He was let go by Ryan in 1989, however, due to off-the-field issues. Carter was signed by the Vikings and turned his life and career around, becoming a 3 time All-Pro and playing in 8 straight Pro Bowls. When he left the Vikings after 2001, he held most of the team career receiving records. He briefly played for the Dolphins in 2002 before retiring.

Since retiring from the NFL, Carter has worked as an analyst on HBO's Inside the NFL, ESPN's Sunday NFL Countdown and Monday Night Countdown, and online at Yahoo Sports. He also works as an assistant coach at St. Thomas Aquinas High School, where his son plays wide receiver.

FULL ARTICLE AT WIKIPEDIA.ORG
This article is licensed under the GNU Free Documentation License.
It uses material from the Wikipedia article "Cris Carter."
Back to Article
/