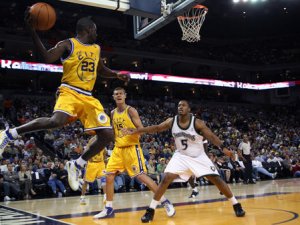 NHL // 4 years ago
Preds' Forsberg goes underneath defenders stick for slick score
Filip Forsberg continues to put on a show in the Stanley Cup playoffs. His latest score involved slipping the puck between a defender and his stick.

Although it is too early to speculate, it is likely that other ... organisms that have this system will use a similar mechanism to inject the effector proteins into their hosts

Many bacterial pathogens use a complex secretion system to inject proteins, known as effectors, into target host cells

Craig Smith (born November 10, 1983 in Inglewood, California) is an American professional basketball player who is currently a member of the Los Angeles Clippers. After playing for Boston College from 2002–2006, he was selected by the Minnesota Timberwolves in the 2006 NBA Draft.

Smith, nicknamed "Rhino", scored 2,349 points in his collegiate career, placing him second on Boston College's career scoring list (behind Troy Bell). In his senior season, he had per-game averages of 17.6 points, 9.4 rebounds, 3.0 assists, 1.2 steals, and 0.8 blocked shots. He also attended Worcester Academy, a preparatory school in Worcester, Massachusetts for a year as a post-graduate student before college.

Craig Smith averaged 7.4 points and 5.1 rebounds in his rookie year (2006–07) with the Minnesota Timberwolves. He earned a starting role for the last five games of the season and averaged 12.0 points and 10.2 rebounds while logging an average 34.4 minutes. He had an increased role in the 2007–08 season after a strong rookie performance and a Vegas Summer League performance during which he averaged 21.8 points and 6.0 rebounds.

FULL ARTICLE AT WIKIPEDIA.ORG
This article is licensed under the GNU Free Documentation License.
It uses material from the Wikipedia article "Craig Smith."