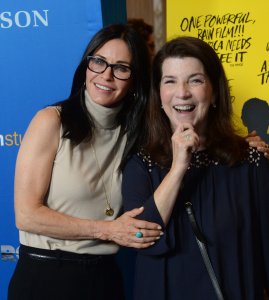 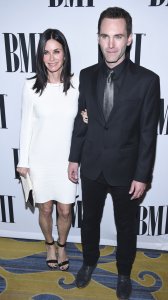 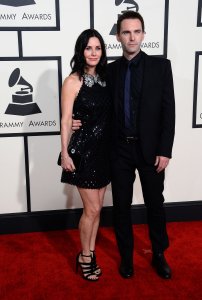 Entertainment News // 4 months ago
Courteney Cox recreates iconic turkey-head gag from 'Friends'
Courteney Cox shared a video on Instagram showing her with a turkey on her head, a nod to a memorable moment from her beloved sitcom, "Friends."

TV // 4 months ago
'Friends' to remain on Nick at Nite under new deal
Nickelodeon renewed its deal with Warner Bros. Television to keep "Friends" in its Nick at Nite programming block.

Movies // 8 months ago
Courteney Cox returning for 'Scream 5'
"Friends" alum Courteney Cox confirmed on Instagram she will return for the upcoming fifth installment in the "Scream" horror movie franchise.

I don't think so. But I would never say 100 percent no

She's running her suburb and in charge of the PTA

Would you want to play yourself or should we just write some fantastic character for you, or maybe you take Drrt down. I mean, I'm sure (Aniston) would love to take one of the magazines down

But I could see how relationships break up if you don't go, 'What are we doing!?

Courteney Bass Cox (born June 15, 1964) is an American actress, who achieved fame for her role as Monica Geller on the NBC sitcom Friends. Cox has also starred in Dirt and the Scream series of movies. She currently stars in the ABC sitcom Cougar Town, for which she earned her first Golden Globe nomination.

Cox was raised in the Birmingham, Alabama suburb of Mountain Brook, the daughter of businessman Richard Lewis Cox (January 28, 1931 – September 3, 2001) and his wife Courteney (née Bass, later Copeland). She has two older sisters, Virginia and Dottie, and an older brother, Richard, Jr. Her parents divorced in 1974 and her mother was remarried to businessman Hunter Copeland (uncle to music promoter and business manager Ian Copeland). After graduating from Mountain Brook High School in Mountain Brook, Alabama, Cox left for Mount Vernon College in Washington, D.C., but did not complete her architecture course, opting instead to pursue a career in modeling and acting.

Cox studied architecture at Mount Vernon College for Women in Washington, D.C., which is now part of The George Washington University, before she dropped out. She appeared in the 1984 music video for Bruce Springsteen's "Dancing in the Dark" as a girl pulled onstage to dance with Springsteen. Cox was the first person to use the word "period" on U.S. television to refer to menstruation in a 1985 advertising campaign for Tampax brand tampons. Her early film roles include Masters of the Universe (1987) and Cocoon: The Return (1988). Her early television work includes a starring role in the short-lived television series Misfits of Science (1985), and later a recurring role (1987–89) on the TV series Family Ties as Lauren Miller, the girlfriend of Alex P. Keaton (Michael J. Fox). She had a supporting role as Jewel, the hard-as-nails assistant to James Belushi's character, in the 1990 fantasy film Mr. Destiny. In 1994, shortly before the debut of the sitcom, Friends, Cox appeared with Jim Carrey in the film Ace Ventura: Pet Detective and on Seinfeld in "The Wife" episode as Jerry's girlfriend named Meryl. In 1995, she was cast in Toad the Wet Sprocket's music video "Good Intentions". The song is also on the Friends Soundtrack.

FULL ARTICLE AT WIKIPEDIA.ORG
This article is licensed under the GNU Free Documentation License.
It uses material from the Wikipedia article "Courteney Cox."
Back to Article
/