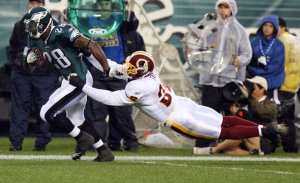 Correll Buckhalter (pronounced /kɔrˈɛl/; born October 6, 1978 in Collins, Mississippi) is an American football running back for the Denver Broncos of the National Football League. He was drafted by the Philadelphia Eagles in the fourth round of the 2001 NFL Draft. He played college football at Nebraska.

He is a cousin of Detroit Lions cornerback Brandon McDonald.

Buckhalter attended Collins High School (Collins, Mississippi) and was a letterman in football. In football, he rushed for 3,024 yards over the last two years of his high school years. He was selected for the all-state team, and during his junior year when he rushed for 1,302 yards. During his senior year, he rushed for 1,722 yards and 12 touchdowns. Buckhalter graduated from Collins in 1997.

FULL ARTICLE AT WIKIPEDIA.ORG
This article is licensed under the GNU Free Documentation License.
It uses material from the Wikipedia article "Correll Buckhalter."