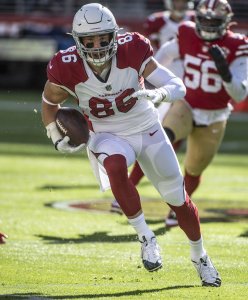 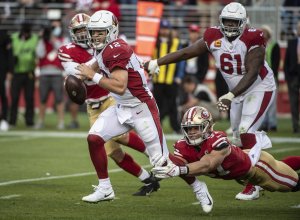 NFL // 1 year ago
Veteran QB Colt McCoy signs with Cardinals
Veteran quarterback Colt McCoy has signed a contract with the Arizona Cardinals, where he will serve as the backup to starter Kyler Murray.

NFL // 2 years ago
Jags OC Jay Gruden says it's his job to 'mesh' with QB Garden Minshew
New Jacksonville Jaguars offensive coordinator Jay Gruden said it will be his job to "mesh" his personality with quarterback Gardner Minshew in 2020.

Daniel Colt McCoy (born September 5, 1986) is the starting quarterback for the Cleveland Browns of the National Football League. He was drafted by the Browns in the third round of the 2010 NFL Draft. He played college football at the University of Texas at Austin.

After sitting out the 2005 Longhorn season as a redshirt, McCoy was the starting quarterback for the 2006 Longhorn team. On November 4, 2006, McCoy threw his 27th touchdown pass in a win against Oklahoma State, to take sole possession of the Texas school record for most touchdowns ever thrown by a quarterback in a single season. Subsequently, in the 2006 Alamo Bowl on December 30, McCoy threw two touchdowns against University of Iowa to tie Nevada's David Neill for second place for freshman touchdowns in a single season. Also during the 2006 season, McCoy was named College Football News Big 12 Player of the Year and was named the quarterback to their "All Freshman Team". Injuries caused him to miss portions of the final two regular season games, but was able to play for the entire duration of the Longhorns' bowl game.

FULL ARTICLE AT WIKIPEDIA.ORG
This article is licensed under the GNU Free Documentation License.
It uses material from the Wikipedia article "Colt McCoy."