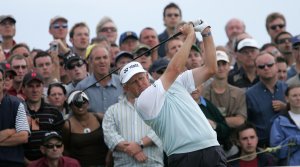 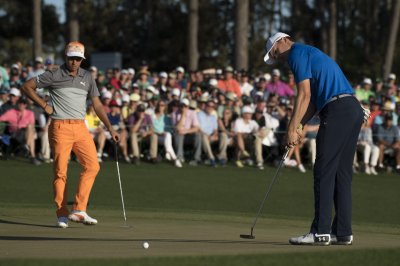 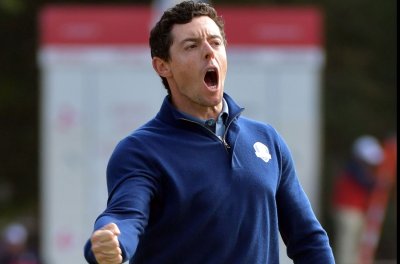 Golf // 4 years ago
PGA Notebook: Tiger to host Los Angeles Open; Australian Masters canceled
--The Tiger Woods Foundation will be the host organization for the tournament that began as the Los Angeles Open, the PGA Tour announced.

Sports News // 5 years ago
Tom Watson leads Senior Open by 1
Tom Watson nearly shot his age on Thursday as he opened with a 4-under 66 at the U.S. Senior Open Championship and was one stroke clear of six players.

After nearly two years of a dry spell, it's great to be back

I got off to a quick start and that was important

This means an awful lot to me, it means confidence. I lost it last year and I have it back now

Colin Stuart Montgomerie, OBE (born 23 June 1963) is a Scottish professional golfer, often referred to by one of his nicknames 'Monty'. He has had one of the finest careers in European Tour history, having won a record eight Order of Merit titles, including a streak of seven consecutively from 1993 to 1999, and 31 European tour victories, placing him fourth on the all time list. He is renowned also for his superb Ryder Cup performances. Montgomerie also has the dubious distinction of being one of the most accomplished players never to have won a major championship, after finishing runner-up on five occasions. Nor has he won an official tournament on the U.S. PGA Tour, unlike several of his main European rivals. His career high world ranking is second.

Although Scottish by birth and ethnicity, he was raised in Yorkshire, England, where his father James was Managing Director of Fox's Biscuits. Montgomerie spent a number of years at the Ilkley Golf Club, where he was tutored by the past professional Bill Ferguson. He was educated at both Leeds Grammar School and Strathallan School, Perthshire. During his time in Leeds, he became a supporter of Leeds United, but still remains a loyal supporter of Glasgow Rangers. His father later became the secretary of Royal Troon Golf Club, one of Scotland's most famous clubs. Montgomerie became one of the first British golfers to go to a United States college, attending Houston Baptist University, where he played on the golf team and became its top player. In later years, many top young British golfers (including Graeme McDowell and Luke Donald) would follow Monty's path to United States universities.

He won three important Scottish amateur tournaments – the 1983 Scottish Youths Championship, the 1985 Scottish Stroke Play Championship, and the 1987 Scottish Amateur Championship. He also played for Scotland twice in the Eisenhower Trophy (1984 and 1986) and for Great Britain and Ireland in the Walker Cup twice (1985 and 1987).

FULL ARTICLE AT WIKIPEDIA.ORG
This article is licensed under the GNU Free Documentation License.
It uses material from the Wikipedia article "Colin Montgomerie."
Back to Article
/