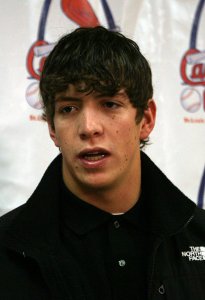 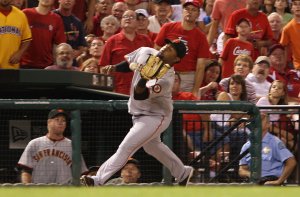 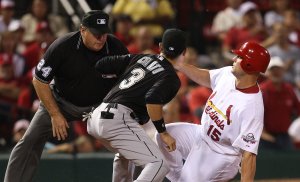 MLB // 3 years ago
Tampa Bay Rays overtake Detroit Tigers with two-run seventh for 3-2 win
Baseball is a sport where you play the percentages because in a 162-game season it pays off.

MLB // 3 years ago
Tampa Bay Rays hold on to beat Oakland Athletics
So far Mallex Smith has proved to be everything the Tampa Bay Rays hoped he would be and more with his ability to get on base.

MLB // 3 years ago
Chris Archer, Tampa Bay Rays cruise to 12-1 victory over Kansas City Royals
After two of their most frustrating losses of the season, the Tampa Bay Rays bounced back with one of their best wins.

MLB // 3 years ago
Toronto Blue Jays bullpen teams up for 2-1 victory over Tampa Bay Rays
ST. PETERSBURG, Fla. -- Bullpen day turned into a 2-1 win for Toronto on Sunday as five relievers combined to throw a three-hitter, and Darwin Barney hit an eighth-inning home run for the Blue Jays at Tropicana Field.

Rasmus played as pitcher and first baseman for Phenix City National Little League during the 1999 Little League World Series. Phenix City won the United States championship game before losing in the finals to Osaka, Japan 5-0. Rasmus finished the World Series with a batting average of .417 and a pitching record of 0-1 with 7 strikeouts.

Rasmus attended Russell County High School in Seale, Alabama. As a senior, he batted .484 with 24 home runs with 66 RBI and 69 runs scored in 39 games . His 24 home runs passed Bo Jackson for second all-time in the state for home runs in a season by a high school player. In a pre-draft workout, Rasmus was clocked at 95 mph (153 km/h) throwing from center field. He also ran 60 yards in 6.7 seconds. Rasmus helped lead Russell County to a national championship in 2005 as they finished the season ranked first in both the National High School Baseball Coaches Association poll and the USA TODAY Super 25 baseball rankings. Rasmus graduated from Russell County High School in 2005. He is the brother of Batavia Muckdogs center fielder Casey Rasmus

FULL ARTICLE AT WIKIPEDIA.ORG
This article is licensed under the GNU Free Documentation License.
It uses material from the Wikipedia article "Colby Rasmus."
Back to Article
/