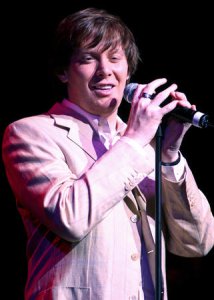 TV // 3 years ago
Tara Reid explains why her 'Sharknado' movies are like the Super Bowl
Actress Tara Reid says she thinks she knows why her "Sharkando" TV movies have become a summer tradition for millions of people.

TV // 3 years ago
Olivia Newton-John, Fabio, Clay Aiken to appear in 'Sharknado 5: Global Swarming'
Syfy announced the official title and guest stars for the next installment in its "Sharkando" franchise.

It was the first decision I made as a father

Now that I have seen Somalia for myself, I feel it is important for the American public to remember that the Somali people have the same dreams for their children that we do

Unfortunately this is a region that's better known for conflict, insecurity, drought and floods

I thought if we could find songs that relate to what's gone on in my life over the past five years and address what I've learned from my experiences, it would be a great concept for my album

Clayton Holmes "Clay" Aiken (né Grissom; born November 30, 1978) is an American singer, songwriter, actor, producer, and author who began his rise to fame on the second season of the television program American Idol in 2003. RCA Records offered him a recording contract, and his multi-platinum debut album Measure of a Man was released in October 2003. He released four more albums on the RCA label: Merry Christmas with Love (2004), A Thousand Different Ways (2006), and the Christmas EP, All is Well (2006). His fourth studio album (the first album of original material since 2003's Measure of a Man), On My Way Here was released on May 6, 2008.

After the release of On My Way Here Aiken left RCA and later signed with Decca Records. His first album with Decca, Tried and True, was released June 1, 2010.

In the years following his American Idol appearance, Aiken has launched nine tours, authored a New York Times best-selling book Learning to Sing: Hearing the Music in Your Life with Allison Glock, and was the executive producer for a 2004 televised Christmas special, A Clay Aiken Christmas. He has been a frequent talk show guest, particularly on The Tonight Show and Jimmy Kimmel Live. He appeared as a guest star on Scrubs and participated in comedy skits on Kimmel, Saturday Night Live and 30 Rock.

FULL ARTICLE AT WIKIPEDIA.ORG
This article is licensed under the GNU Free Documentation License.
It uses material from the Wikipedia article "Clay Aiken."
Back to Article
/