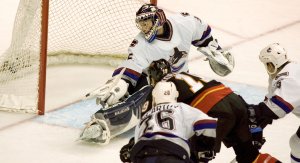 Kobasew spent one season playing at Boston College, starring on a team which won the National Championship and was loaded with players headed to the NHL. At the NCAA Frozen Four, he was named MVP for the tournament. Following the Eagles' win over the North Dakota Fighting Sioux, he jumped to the professional ranks.

He was drafted by the Calgary Flames in the first round (14th overall) in the 2001 NHL Entry Draft. During the 2004–05 NHL lockout, Kobasew played with the American Hockey League (AHL)'s Lowell Lock Monsters, and helped the team reach a number of franchise records. He was named as captain for the team, and scored 75 points in 79 games. He was also selected to play for the Canadian contingent at that year's All-Star game.

FULL ARTICLE AT WIKIPEDIA.ORG
This article is licensed under the GNU Free Documentation License.
It uses material from the Wikipedia article "Chuck Kobasew."
Back to Article
/