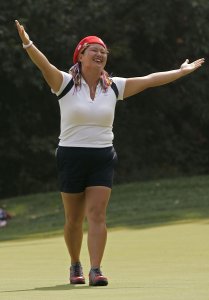 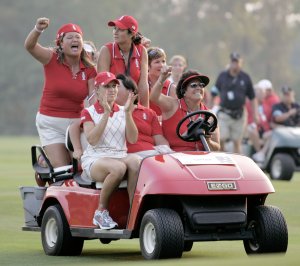 Sports News // 3 years ago
Katherine Kirk claims lead while Sei Young Kim struggles in LPGA Classic
Katherine Kirk of Australia shot a 9-under-par 63 on Friday to surge to the top of the leaderboard before play was suspended in the second round of the Thornberry Creek LPGA Classic in Oneida, Wis.

Sports News // 4 years ago
Brooke Henderson on top after first round of Women's PGA
SAMMAMISH, Wash. -- Canadian teenager Brooke Henderson rode a hole-in-one and birdies on three of her final four holes to a 4-under 67.

Sports News // 6 years ago
2014 LPGA Tour Year In Review
The 2014 LPGA Tour season has come and gone, but not before it left behind an incredible number of storylines that should continue to develop heading into the 2015 campaign.
Sports News // 7 years ago
Mika Miyazato leads LPGA's Evian Championship
Mika Miyazato piled up seven birdies in taking the first-round lead Friday at the LPGA's Evian Championship in France.
Sports News // 7 years ago
Carlota Ciganda seeks first 1st win after grabbing 2-shot Texas lead
Carlota Ciganda put herself in position for her first tour win Saturday, firing a 5-under 66 for a third-round lead at the inaugural North Texas LPGA Shootout.
Sports News // 7 years ago
Rookie leads on LPGA Tour
LPGA Tour rookie Caroline Masson turned in a bogey-free round of 7-under 64 Thursday that gave her a two-shot lead at the North Texas Shootout.
Sports News // 9 years ago
UPI NewsTrack Sports
NBA delays start of training camp ... Europe up by one match at Solheim Cup ... Olympic boxing fix alleged ... Flyers' Simmonds target of apparent racial attack ... Sports news from United Press International.
Sports News // 9 years ago
Europe up by one match at Solheim Cup
A victory by Anna Nordqvist and Suzann Pettersen gave the European team a 4 1/2-3 1/2 lead over the United States at the Solheim Cup competition in Ireland.
Sports News // 9 years ago
Blumenherst leads on LPGA Tour
Amanda Blumenherst, in her second year on the LPGA Tour, took a one-shot lead Thursday after one round of the Kia Classic.

Today was just personally quite a struggle I thought actually

It was a thrilling day, but it took me a couple holes to get my head out of my way, I guess

My swing is working good, and my short game is good

I think there should be a lot of low scores

Christina Kim (born March 15, 1984) is an American professional golfer from San Jose, California, currently playing on the LPGA Tour. She is known for her animated style of play, flamboyant dress, and outgoing personaliity.

Kim won the 2004 Longs Drugs Challenge and the 2005 Mitchell Company Tournament of Champions and was a member of the winning American Solheim Cup teams in 2005 and 2009. She was the youngest player to reach $1 million in earnings, which she achieved in 2004 at age 20. This record was broken the following year by Paula Creamer.

Kim's autobiography, Swinging from My Heels: Confessions of an LPGA Star, co-written with Alan Shipnuck was published in 2010.

FULL ARTICLE AT WIKIPEDIA.ORG
This article is licensed under the GNU Free Documentation License.
It uses material from the Wikipedia article "Christina Kim."
Back to Article
/