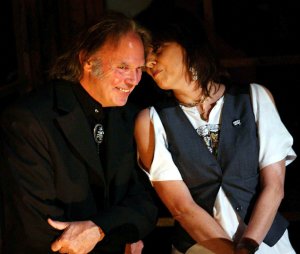 Top News // 3 years ago
The Almanac
On Sept. 7, 1977, President Carter and Panamanian leader Omar Torrijos signed a treaty to transfer control of the Panama Canal from the United States to Panama.

I'm never trying to sell my fish, as it were. I'm not particularly ambitious or trying to be remembered in particular or anything like that

She Bop II: The Definitive History of Women in Rock, Pop and Soul

Chrissie Hynde (born Christine Ellen Hynde, 7 September 1951, Akron, Ohio) is an American rock musician, best known as the leader of the band The Pretenders. She is a singer, songwriter, and guitarist, and has been the only constant member of the band throughout its history. Hynde has a contralto vocal range.

Hynde now lives in London, England, and also has an apartment in the Highland Square neighborhood in her hometown of Akron.

Daughter of a part-time secretary and a Yellow Pages Manager, Hynde graduated from Firestone High School in Akron, admitting "I was never too interested in high school. I mean, I never went to a dance, I never went out on a date, I never went steady. It became pretty awful for me. Except, of course, I could go see bands, and that was the kick. I used to go to Cleveland just to see any band. So I was in love a lot of the time, but mostly with guys in bands that I had never met. For me, knowing that Brian Jones was out there, and later that Iggy Pop was out there, made it kind of hard for me to get too interested in the guys that were around me. I had, uh, bigger things in mind."

FULL ARTICLE AT WIKIPEDIA.ORG
This article is licensed under the GNU Free Documentation License.
It uses material from the Wikipedia article "Chrissie Hynde."
Back to Article
/