Entertainment News // 1 year ago
Melissa Benoist opens up about domestic abuse she suffered in the past
"Supergirl" star Melissa Benoist revealed in an Instagram video she was a victim of domestic violence at the hands of a former partner. 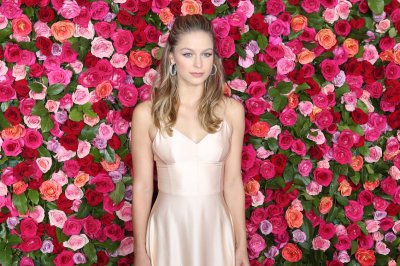 I struggled a little bit with the pace of uphill putts, but I had some really good shots and gave myself quite a lot of chances

Chris Wood is an English folk musician and composer who plays fiddle, viola and guitar, and sings. He is an ardent enthusiast for traditional English dance music (with a background in English church music), including Morris and other rituals and ceremonies, but his repertoire also includes much French folk music and traditional Québécois material. He has worked for many years in a duo with button accordion/melodeon player Andy Cutting: Wood & Cutting are one of the most influential acts on the English folk music scene. Q Magazine gave their "Live at Sidmouth" album four stars and put the duo "at the forefront of the latest wave of British music acts". One of his first recordings was playing bass and percussion on "Jack's Alive" (1980) the first album by the Oysterband (at that time called the Oyster Ceilidh Band).

Wood is also a member of the acclaimed Wood, Wilson & Carthy, with Roger Wilson and Martin Carthy. Wood & Cutting, together with piano accordionist Karen Tweed and guitarist Ian Carr, make up the Two Duos Quartet, who have made one album "Half as happy as we". With John Dipper on fiddle and Robert Harbron on concertinas, he is part of the English Acoustic Collective. This is also the name of an organisation which Wood set up in 1999 to link the many threads of his teaching activities, including summer schools based at Ruskin Mill near Nailsworth, Gloucestershire.

Other projects include "Listening to the River" (a concert project which interweaves recordings of dialect and oral history from the area around the River Medway with live music) and "Glassblower", described as "an industrial ballet".

FULL ARTICLE AT WIKIPEDIA.ORG
This article is licensed under the GNU Free Documentation License.
It uses material from the Wikipedia article "Chris Wood."
Back to Article
/