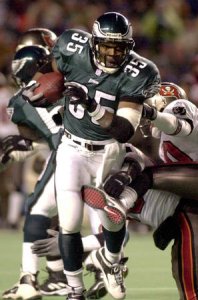 College Football // 3 years ago
Baker Mayfield, No. 12 Oklahoma outlast Texas
DALLAS -- A series that has produced so many tight games produced another Saturday as No. 12 Oklahoma built a big lead early and then hung on by the skin of its teeth for a 29-24 win over Texas in the Red River Showdown at the Cotton Bowl.

College Football // 3 years ago
USC Trojans vs. Texas Longhorns a showcase of QBs
LOS ANGELES -- One of the most famous plays in college football history -- Vince Young's fourth-down touchdown in the 2006 Rose Bowl Game -- took place when the Texas Longhorns played the USC Trojans.

Sports News // 3 years ago
College football notebook: Clemson's defensive line dominates scrimmage
Ohio State has a solid counter-argument, but Clemson might have the best defensive line in the country.

Christipher Collins Warren (born January 24, 1967 in Silver Spring, Maryland) is a former American football running back in the National Football League. At 6'2", 226 lb., he played for 11 seasons from 1990 to 2000, primarily for the Seattle Seahawks, but also for the Dallas Cowboys and the Philadelphia Eagles.

Warren attended Robinson Secondary School in Fairfax, Virginia, graduating in 1985. After an outstanding football career in high school, he enrolled at the University of Virginia, but transferred after two years and finished his college career at Ferrum College, a Division III school in rural southwestern Virginia. He was drafted by the Seahawks in the fourth round (89th overall) of the 1990 NFL Draft.

Initially seeing action as a kick returner, Warren's breakout season came in 1992 when he rushed for 1,017 yards. He followed that season with three more years with at least 1,000 yards rushing, setting a career-high in 1994 with 1,545 rushing yards. In 1995, Warren set another career-best with 15 rushing touchdowns.

FULL ARTICLE AT WIKIPEDIA.ORG
This article is licensed under the GNU Free Documentation License.
It uses material from the Wikipedia article "Chris Warren."
Back to Article
/