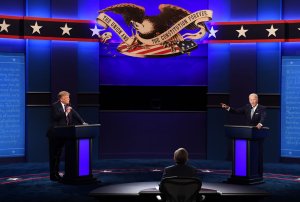 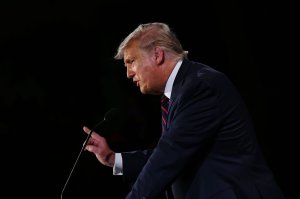 U.S. News // 1 year ago
Debates commission to change structure after Tuesday night chaos
The organization that sets the procedures for presidential debates announced Wednesday that it plans to re-structure the events going forward after the chaos and verbal sparring of the night before.

U.S. News // 1 year ago
Trump, Biden to square off on 6 issues in 1st presidential debate
President Donald Trump and his Democratic challenger, former Vice President Joe Biden, will square off Tuesday night in the first of three debates before the Nov. 3 election.

Marc is a very skilled center in terms of his shooting and passing, possesses outstanding toughness and is a winning, team-oriented player,

The Grizzlies and Allen Iverson have come to a mutual agreement that because of personal matters that forced him to leave the team ... Allen will step away from the game at this time, allowing him to focus on those matters

Professor Christopher Stewart Wallace (26 October 1933—7 August 2004) was an Australian computer scientist (and physicist, who also contributed to a variety of other areas) notable for having devised:

He was appointed Foundation Chair of Information Science at Monash University in 1968 at the age of 34 (before the Department was later re-named Computer Science), and Professor Emeritus in 1996. Wallace was a fellow of the Australian Computer Society and in 1995 he was appointed a fellow of the ACM "For research in a number of areas in Computer Science including fast multiplication algorithm, minimum message length principle and its applications, random number generation, computer architecture, numerical solution of ODE's, and contribution to Australian Computer Science."

FULL ARTICLE AT WIKIPEDIA.ORG
This article is licensed under the GNU Free Documentation License.
It uses material from the Wikipedia article "Chris Wallace."