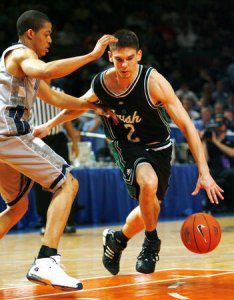 Christopher James Quinn (born September 27, 1983 in New Orleans, Louisiana) is an American professional basketball player who is currently a member of the San Antonio Spurs of the NBA.

Quinn played his high school basketball at Dublin Coffman High School in Dublin, Ohio where he set 14 school records and was named Columbus Dispatch Player of the Year in 2002. He was also twice named first-team all-state and was runner-up for Mr. Basketball honors in Ohio as a senior finishing behind NBA star Lebron James. Having also been named the Ohio Capital Conference Player of the year, Quinn led his team to back-to-back conference championships, as well as two straight district championships.

At the University of Notre Dame, Quinn was a three-year starter and two-time co-captain. He finished his career averaging 14.6 points, 3.5 assists, 2.7 rebounds and 1.27 steals per game. As a senior, he led the team in scoring (17.7 ppg), assists (6.4 apg) and was tied for first in steals (1.55 spg), while shooting 42 percent from three-point range. Quinn was a First Team All-Big East selection and also was a Big East Academic All-Star selection as a junior and freshman.

FULL ARTICLE AT WIKIPEDIA.ORG
This article is licensed under the GNU Free Documentation License.
It uses material from the Wikipedia article "Chris Quinn."