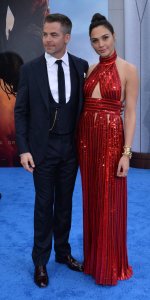 Entertainment News // 1 year ago
What to stream Christmas weekend: 'Wonder Woman 1984,' 'Soul'
Gal Gadot is back as Wonder Woman, Jamie Foxx voices the lead in Disney and Pixar's next animated feature and Shonda Rhimes has a new period drama premiering this holiday weekend.

Pine was born in Los Angeles, California. His father, Robert Pine, is an actor who appeared in CHiPs as Sergeant Joseph Getraer, and his mother, Gwynne Gilford, is a former actress who is now a practicing psychotherapist. He has an older sister, Katie. Pine's maternal grandparents were Anne Gwynne, a Hollywood actress, and Max M. Gilford, an attorney who was elected president of the Hollywood Bar Association. Pine is of Welsh and Jewish descent on his mother's side. He has stated in an interview, "I definitely have a spiritual outlook... I am not a religious guy, I am probably agnostic".

Pine attended Oakwood School for high school and received a bachelor's degree in English from the University of California, Berkeley in 2002. He also studied English at the University of Leeds in England for one year. After graduation, he studied at the American Conservatory Theater in San Francisco.

FULL ARTICLE AT WIKIPEDIA.ORG
This article is licensed under the GNU Free Documentation License.
It uses material from the Wikipedia article "Chris Pine."