MLB // 2 years ago
Cubs attempt to prevent sweep by Reds
It was unheard of not that long ago, but now it has become somewhat commonplace: pitchers by committee.

MLB // 2 years ago
Byron Buxton helps hot Minnesota Twins knock off Detroit Tigers
The Minnesota Twins may not be in front of the Cleveland Indians, their next opponent, but they are some six weeks ahead of last year.

MLB // 3 years ago
Houston Astros beat Minnesota Twins behind Mike Fiers' strong start
It has become commonplace to assess Mike Fiers' performances based on the number of home runs he allows in an outing. 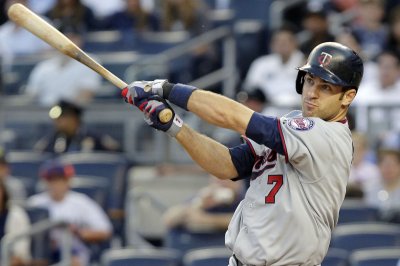 MLB // 3 years ago
Ervin Santana's one-hit gem sends Minnesota Twins past Chicago White Sox
Catcher Chris Gimenez went to the mound to give Santana a chance to reset after a walk, a wild pitch and a long foul ball by Jose Abreu of the White Sox.

Sports News // 3 years ago
Miguel Cabrera powers Detroit Tigers past Cleveland Indians 12-0
DETROIT -- Justin Verlander got Detroit back on track, but the problem the Tigers face is staying on the rails until their ace can pitch again Sunday.

Gimenez went to Gilroy High School, and was drafted by the Colorado Rockies in the 34th round (1024th overall) of the 2001 Major League Baseball Draft, but did not sign.

Gimenez attended the University of Nevada, and was chosen by the Cleveland Indians in the 19th round (557th overall) of the 2004 Major League Baseball Draft. He signed and joined the Indians minor league system, playing with the Mahoning Valley Scrappers, Lake County Captains, Kinston Indians, Akron Aeros, Buffalo Bisons, and Columbus Clippers.

FULL ARTICLE AT WIKIPEDIA.ORG
This article is licensed under the GNU Free Documentation License.
It uses material from the Wikipedia article "Chris Gimenez."
Back to Article
/