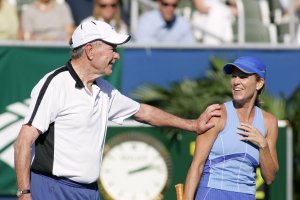 Sports News // 4 years ago
Injured Serena Williams stunned in U.S. Open semifinals
NEW YORK -- History repeated itself for Serena Williams, and not in a good way.

Christine Marie "Chris" Evert (born December 21, 1954) is a former world number 1 professional tennis player from the United States. She won 18 Grand Slam singles championships, including a record seven championships at the French Open and a record six championships at the U.S. Open. According to the Women's Tennis Association, she was the year-ending World No. 1 singles player in 1975, 1976, 1977, 1980, and 1981 and, according to many sources, in 1974 and 1978, also.

Evert's career win–loss record in singles matches of 1,309–146 (.900) is the best of any professional player in tennis history. In tennis writer Steve Flink's book The Greatest Tennis Matches of the Twentieth Century, he named Evert as the third best female player of the 20th century, after Steffi Graf and Martina Navratilova. Evert never lost in the first or second rounds of a Grand Slam singles tournament. She won 157 singles championships. In women's doubles, Evert won three Grand Slam titles and 29 regular tour championships.

Evert began taking tennis lessons when she was five years old from her father, Jimmy Evert (a professional tennis coach who had won the men's singles title at the Canadian Championships in 1947). By 1969, she had become the No. 1 ranked 14-under girl in the United States. Evert played her first senior tournament in that year also, reaching the semifinals in her home town of Fort Lauderdale, Florida, losing to Mary Ann Eisel 7–5, 3–6, 6–1. (For years, this was the record for the furthest a player had reached in her first senior-level tournament. That record was broken when another Floridian, Jennifer Capriati, reached the final of the tournament in Boca Raton, Florida, in 1990 at the age of 13.) In 1970, Evert won the national sixteen-and-under championship and was invited to play in an eight player clay court tournament in Charlotte, North Carolina. The 15 year-old Evert defeated Françoise Durr 6–1, 6–0 in the first round before defeating Margaret Court 7–6, 7–6 in a semifinal. Court was the World No. 1 player and had just won the Grand Slam in singles. These results led to Evert's selection for the U.S. Wightman Cup team, the youngest player ever in the competition.

FULL ARTICLE AT WIKIPEDIA.ORG
This article is licensed under the GNU Free Documentation License.
It uses material from the Wikipedia article "Chris Evert."
Back to Article
/