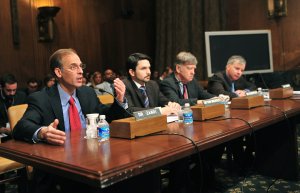 Sports News // 4 years ago
AFC West: Camp goals, roster breakdown
AFC West camp capsules
U.S. News // 6 years ago
Unemployment insurance running out for 1.3M long-term unemployed
Extended unemployment benefits expire this weekend for 1.3 million long-term unemployed Americans, an event the White House said "defies" reason.
Odd News // 7 years ago
Jockstrip: The world as we know it.
Ambulance stolen for joyride in Colorado ... Big feet clues aid police in theft arrest ... Ore. senator scares off burglar with bat ... Cat tries to sneak into prison with tools ... The world as we know it from UPI.
Odd News // 7 years ago
Ore. senator scares off burglar with bat
An Oregon state senator said he scared off a burglar by threatening him with a baseball bat.
Top News // 1 decade ago
Deficit numbers hamstring next president
The $700 billion financial bailout on top of a $400 billion deficit will hamper the next U.S. president's spending plans, a political analyst said.
Business News // 1 decade ago
Kennedy to push for another wage hike
U.S. Sen. Ted Kennedy, D-Mass., says he will lead a fight on Capitol Hill to raise the nation's minimum wage to $9.50 an hour in 2009.
Top News // 1 decade ago
Power outages strand Six Flags riders
Power outages at the Six Flags Great America amusement park in Illinois stranded passengers on roller coasters and shut down rides for more than two hours.
Business News // 1 decade ago
Bush fever may abate on economic realities
For many voters, the Nov. 2 elections were less about the economy and more about worries over terrorism as well as concerns about moral issues. But for many exe
Entertainment News // 1 decade ago
Jennings makes it No. 18 on Jeopardy
Ken Jennings Friday chalked up his 18th straight "Jeopardy" victory, bringing his winning total to $601,760.
Business News // 1 decade ago
Candidates take a thrashing over economics
Though Bush and Kerry claim to be on opposite sides of the economic fence, participants in a discussion at Libertarian think tank Cato Institute indicated that

The Bush administration thought, 'Oh we'll get this off the table,' but the Ted Kennedys always come back for more

The risk if he's elected is that he wouldn't listen to the boring Bob Rubin, 'reduce the deficit' advice -- he'd want a big legislative achievement and it would be something to make the liberal base of his party happy such as universal health care

Candidates take a thrashing over economics May 26, 2004

Candidates take a thrashing over economics May 26, 2004

Most families that make under $30,000 a year don't pay a dime of federal tax because of the child tax credit, earned income tax credit, standard deductions and personal exemptions

Chris Edwards is an English professional boxer who competes in the flyweight and Super flyweight divisions. He comes from Stoke-on-Trent and is the current Commonwealth and former British flyweight champion.

Edward's made his professional debut in the Welsh town of Ebbw Vale in April 1998, beating Chris Thomas via TKO in the 2nd round. The victory was to be his last for the next two years. Fighting a further six times between September 1998 and September 2000 Edward's went on to lose on all six occasions. Despite his long run of defeats Edwards managed to stem the tide of defeat with two victories coming in October and November 2000 allowing him to end the year with a pro record of won 3, lost 6. The next year (2001) saw Edward's revert to the journeyman type with four fights resulting in a further two defeats against one draw and one win against Neil Read.

Read was also to prove Edwards solitary opponent throughout the whole of 2002 when in October of that year the two men met one more. Edward's picked up his fifth pro win (2nd against Read) with a points victory over six rounds at the Kings Hall in Stoke. Only one fight followed in 2003 with Edwards this time losing to future British and Commonwealth champion Lee Haskins in June again over six rounds.

FULL ARTICLE AT WIKIPEDIA.ORG
This article is licensed under the GNU Free Documentation License.
It uses material from the Wikipedia article "Chris Edwards."
Back to Article
/