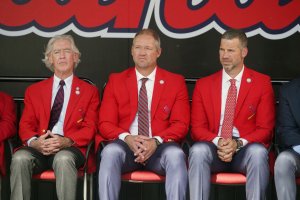 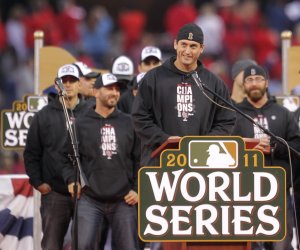 Christopher John Carpenter (born April 27, 1975 in Exeter, New Hampshire) is a starting pitcher in Major League Baseball who has played for the St. Louis Cardinals since 2003, and is currently signed with the team until the 2011 season, with a club option for 2012. Carpenter was 22 years old and a highly-regarded prospect when he broke into the majors in 1997 with the Toronto Blue Jays. He stayed with Toronto until after the 2002 season. He is 6' 6" and weighs 230 pounds.

Carpenter began his pro career with the Medicine Hat Jays of the short-season Pioneer League in 1994. In his debut against the Great Falls Dodgers, he tossed six scoreless innings of one-hit ball, fanning nine along the way. He ended up with a mark of 6–3 and turned in the league’s third-lowest ERA. He was also picked as the Pioneer League’s #3 prospect by league managers, behind Aaron Boone and Ray Brown.

Carpenter made his major league debut as a starter against the Minnesota Twins on May 12, 1997, pitching three innings in a 12–2 loss. He would lose his first five decisions before defeating the Chicago White Sox 6–5 on August 19, 1997. Carpenter pitched his first career complete game and shutout on September 9, 1997 as Toronto defeated the Anaheim Angels 2–0. Carpenter finished his rookie season with a 3–7 record and a 5.09 ERA.

FULL ARTICLE AT WIKIPEDIA.ORG
This article is licensed under the GNU Free Documentation License.
It uses material from the Wikipedia article "Chris Carpenter."