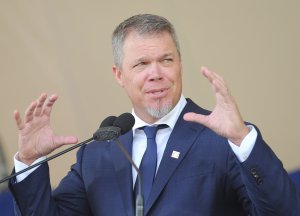 MLB // 3 years ago
Mets' David Wright gets his final at-bats Saturday vs. Marlins
The 1,584th major league game for David Wright was the first one in which he ever thought he was going to throw up while in the on-deck circle.

I don't know that it wouldn't have happened in Orlando

I came in (to the doctor Wednesday night) and said, 'This needs rest,

I have a hard time sitting on the sideline for a bruise. That led me to believe that it was a little more pain than just your average bruise

I thought balls and strikes all night, when we were at the plate, were horrendous

Larry Wayne "Chipper" Jones, Jr. (born April 24, 1972) is a Major League baseball player for the National League's Atlanta Braves. Although initially a shortstop, he has spent most of his career as the starting third baseman for the Braves. In 2002 and 2003, Jones primarily played left field, before returning to third base in 2004.

Jones debuted in 1993, and has played his entire career with the Atlanta Braves. Chipper won the 1999 National League Most Valuable Player Award, as well as the 1999 and 2000 National League Silver Slugger Award for third basemen. He currently holds the Braves team record for career on base percentage (.406), and on July 5, 2007, he passed Dale Murphy for third place on the Braves all-time career home run list.

FULL ARTICLE AT WIKIPEDIA.ORG
This article is licensed under the GNU Free Documentation License.
It uses material from the Wikipedia article "Chipper Jones."