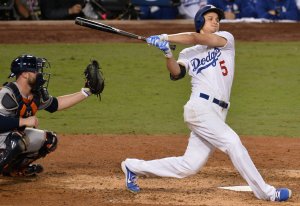 MLB // 3 years ago
Giants, Cueto hope to keep Dodgers down
LOS ANGELES -- Johnny Cueto got an up-close-and-personal look at how to hold down an explosive Los Angeles Dodgers' offense.

MLB // 3 years ago
2017 World Series: Thousands celebrate Houston Astros' first title in downtown parade
Houston Astros standout pitcher Dallas Keuchel had something he wanted to ask the thousands of fans lined outside City Hall on Friday who came to celebrate with the new World Series champions. 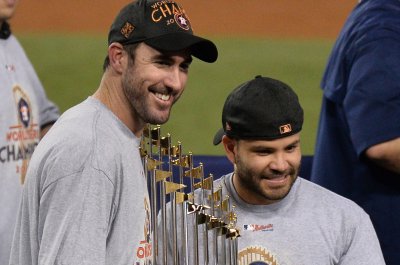 MLB // 3 years ago
Young Houston Astros figure to be force into future
It started with some revolutionary, out-of-the box thinking. It picked up steam when the game plan was adjusted last offseason. And it was galvanized with a major trade and an act of God. 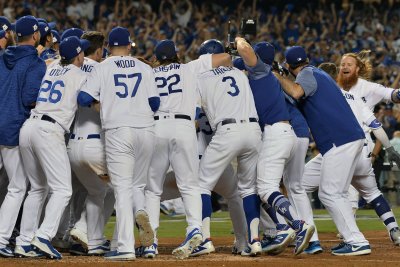 Chase Cameron Utley (pronounced /ˈʌtliː/; born December 17, 1978) is a second baseman for the Philadelphia Phillies of Major League Baseball. A native of the Greater Los Angeles area, he was raised in the city of Long Beach. He was a star baseball player at Long Beach Polytechnic High School before moving on to UCLA.

Utley bats left-handed and throws right-handed. Since becoming a permanent fixture as the Phillies' second baseman, Utley has demonstrated versatility as a player and as an athlete, spending some time at first base as well. As his fielding has improved over his career, Utley is seen in combination with Jimmy Rollins as one of the best middle-infield combinations in the NL. Utley is considered by fans to be a team leader, alongside Rollins and Ryan Howard.

Utley played in the Cape Cod Baseball League for the Cotuit Kettleers, an amateur baseball team, in 1999 while he was still attending UCLA. After his summer experience with Cotuit and college career, Utley was drafted by the Philadelphia Phillies in the first round (15th pick) of the 2000 amateur draft and played for the Phillies' farm system with the Batavia Muckdogs (A-short season; now a Cardinals affiliate) in 2000, the Clearwater Phillies (A, now Clearwater Threshers) in 2001, and the Scranton/Wilkes-Barre Red Barons (AAA; now a Yankees affiliate) in 2002 and 2003.

FULL ARTICLE AT WIKIPEDIA.ORG
This article is licensed under the GNU Free Documentation License.
It uses material from the Wikipedia article "Chase Utley."
Back to Article
/