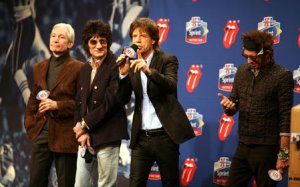 TV // 3 months ago
Gaga, Legend sing 'The Prayer' with Dion, Bocelli for 'Together at Home'
Lady Gaga and John Legend joined in on Celine Dion and Andrea Bocelli's performance of their song "The Prayer" during Saturday's "Global Citizen One World: Together" at Home concert.

It was an experiment that went on far too long, and it was the only thing in the world that ever beat me

My personality changed completely. It was a nightmare for my daughter and my wife

Charles Robert "Charlie" Watts (born 2 June 1941) is an English drummer, best known as a member of The Rolling Stones. He is also the leader of a jazz band, a record producer, commercial artist, and horse breeder.

Charlie Watts was born to Charles Watts, a lorry driver for a precursor of British Rail and his wife Lilian (née Eaves) at University College Hospital, London, and raised (along with his sister Linda) in Islington and then Kingsbury. He attended Tylers Croft Secondary Modern School from 1952 to 1956; as a schoolboy, he displayed a talent for art, cricket and football.

Watts' parents gave him his first drum kit in 1955; he was interested in jazz, and would practice drumming along with jazz records he collected. After completing secondary school, he enrolled at Harrow Art School (now the University of Westminster), which he attended until 1960. After leaving school, Watts worked as a graphic designer for an advertising company, and also played drums occasionally with local bands in coffee shops and clubs. In 1961 he met Alexis Korner, who invited him to join his band, Blues Incorporated. At that time Watts was on his way to a sojourn working as a graphic designer in Denmark, but he accepted Korner's offer when he returned to London in February 1962.

FULL ARTICLE AT WIKIPEDIA.ORG
This article is licensed under the GNU Free Documentation License.
It uses material from the Wikipedia article "Charlie Watts."
Back to Article
/