U.S. News // 6 months ago
Lawmakers propose bill to honor Capitol Officer who drew rioters away from Senate
A group of lawmakers introduced legislation to present Capitol Police Officer Eugene Goodman with the Congressional Gold Medal for leading rioters away from the Senate chamber last week.

U.S. News // 1 year ago
FBI rolls out Rapid DNA pilot testing program for felony suspects
The FBI has launched a program in Florida to rapidly match DNA samples from felony suspects with a national database of DNA collected in unsolved crimes, potentially aiding in the arrest of dangerous criminals.

U.S. News // 4 years ago
House passes spending bill with $1.6B to begin border wall
The House approved a $788 billion national security bill Thursday that includes $1.6 billion towards a wall along the U.S.-Mexico border.

U.S. News // 5 years ago
David Jolly abandons Florida Senate run, says Marco Rubio jumping in
Florida Rep. David Jolly is abandoning plans to pursue a Senate campaign, the surest sign yet that Sen. Marco Rubio will hop into the contest for his seat. 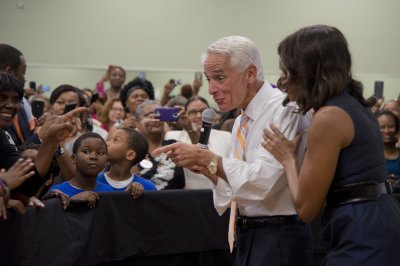 I'm confident we can get the relief, and hopefully by the end of the week, get $50 million for Florida

Here in Florida, we've shown that when we put people first and work together, much can be accomplished, and I intend to bring that same approach to Washington

I don't find anything offensive about it, but it's not something I'd order off the menu

Charles Joseph "Charlie" Crist Jr. (pronounced /ˈkrɪst/; born July 24, 1956) is an American politician who was the 44th Governor of Florida. Prior to his election as governor, Crist previously served as Florida State Senator, Education Commissioner, and Attorney General. He was elected governor in 2006 with 52.4 percent of the vote (against opponent Jim Davis), and took office the following year.

Crist was born in Altoona, Pennsylvania on July 24, 1956, to Charles Joseph Crist, Sr., an American physician of Greek Cypriot descent, and Nancy (née Lee), of Scots-Irish American descent. His family name is adapted from the original Greek name "Christodoulou". Crist moved to St. Petersburg, Florida, as a child, where he attended Riviera Middle School and graduated from St. Petersburg High School in 1974. He is the second of four children and has three sisters: Margaret Crist Wood, Elizabeth Crist Hyden, and Catherine Crist Kennedy. He attended Wake Forest University for two years, where he played quarterback for the Wake Forest Demon Deacons football team. Crist earned his undergraduate degree from Florida State University where he was elected Vice President of the student body and became a member of the Pi Kappa Alpha fraternity. He received his law degree from the Cumberland School of Law in Alabama.

FULL ARTICLE AT WIKIPEDIA.ORG
This article is licensed under the GNU Free Documentation License.
It uses material from the Wikipedia article "Charlie Crist."
Back to Article
/