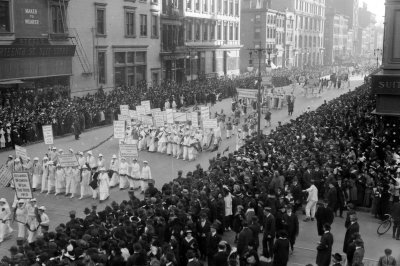 Top News // 4 years ago
The Almanac
On Aug. 26, 1920, eight days after it was ratified, the 19th Amendment to the U.S. Constitution went into effect -- giving women the right to vote.

Charlie Chan is a fictional Chinese-American detective created by Earl Derr Biggers in 1923. Loosely based on Honolulu detective Chang Apana, Biggers conceived of the benevolent and heroic Chan as an alternative to Yellow Peril stereotypes, such as villains like Fu Manchu. Chan is a detective of the Honolulu police, though many stories feature Chan traveling the world as he investigates mysteries and solves crimes.

Chan first appeared in Biggers' novels, but went on to be featured in a number of media. Over four dozen films featuring Charlie Chan have been made, beginning in 1926. The character was at first portrayed by Asian actors, and the films met with little success. In 1931, the Fox Film Corporation cast Swedish actor Warner Oland as Chan in Charlie Chan Carries On; the film was a success, and Fox went on to produce 15 more Chan films with Oland in the title role. After Oland's death, American actor Sidney Toler was cast as Chan; Toler made 22 Chan films, first for Fox and then for Monogram Studios. After Toler's death, six more films were made, starring Roland Winters.

In addition, a number of Spanish- and Chinese-language Chan films were made during the 1930s, 1940s, and 1950s. American-made Chan films were shown in China to much success, where the character was popular and respected. More recent film adaptations in the 1990s have been unsuccessful. The character has also been featured in several radio programs, two television shows, and a number of comics.

FULL ARTICLE AT WIKIPEDIA.ORG
This article is licensed under the GNU Free Documentation License.
It uses material from the Wikipedia article "Charlie Chan."
Back to Article
/