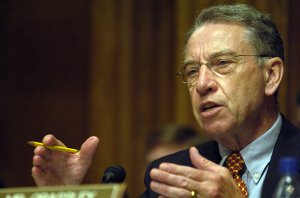 World News // 4 years ago
Report: 152 Afghan trainees went AWOL in U.S. since 2005
More than 150 Afghan troops training in the United States have fled military bases and gone AWOL since 2005, according to a report by a watchdog.

U.S. News // 4 years ago
Sessions refuses to tell Senate panel of Trump talks about Comey
Attorney General Jeff Sessions on Wednesday refused to tell the Senate Judiciary Committee about his prior conversations with President Donald Trump.

U.S. News // 5 years ago
Administration sitting on unspent funds for Zika
The administration is struggling to explain why it is pressing Congress for more money to fight Zika while sitting on $385 million it already controls.

This is an extraordinary request. I would not make it if the situation in the Midwest were not so dire

It's unfair to allow a publicly traded company to act like a corporation but not pay corporate tax, contrary to the intent of the tax code

Charles Ernest 'Chuck' Grassley (born September 17, 1933) is the senior United States Senator from Iowa. A Republican, he has served in the Senate since 1981. From 1958 to 1974, he was an Iowa state legislator. Thereafter he served three terms as a member of the United States House of Representatives. He has twice held the chairmanship of the Finance Committee, from January to June 2001 and from January 2003 to December 2006. He is currently the ranking Republican on the Judiciary Committee.

FULL ARTICLE AT WIKIPEDIA.ORG
This article is licensed under the GNU Free Documentation License.
It uses material from the Wikipedia article "Charles E. Grassley."