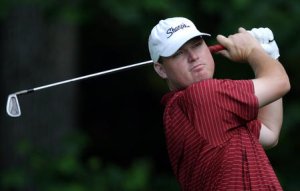 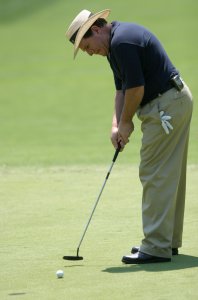 Sports News // 2 years ago
Webb Simpson, Cameron Champ return to PGA Tour after COVID-19-related withdraws
World No. 6 Webb Simpson and No. 80 Cameron Champ returned Thursday for the PGA Tour's Rocket Mortgage Classic after they withdrew from the Travelers Championship eight days ago due to coronavirus-related precautions.

Golf // 4 years ago
Shriners Hospitals Open: 10 players to watch
1. Tony Finau, United States -- After tying for 11th in the WGC-HSBC Champions, Finau made the long flight back from China to play this week in Las Vegas. A late bogey cost him a second top-10 result in three starts to open the 2017-18 season, as he also finished second to Brendan Steele in the Safeway Open and tied for 26th in the CJ Cup at Nine Bridges in South Korea. The strong start has placed Finau fifth in the early FedExCup standings after he wrapped up last season with ties for seventh in both the BMW Championship and the Tour Championship. That gave him eight top-10 finishes for the season and he wound up 19th in the final point standings. Finau, a native of Utah, gets close to a home game in his fourth start in Vegas, having tied for seventh in his first appearance in 2014 and tied for 16th two years ago before a 74 dropped in to a tie for 41st after he played the middle rounds in 65-65 last year.

Sports News // 4 years ago
Patrick Rodgers leads by two at John Deer Classic
Patrick Rodgers fired a 7-under-par 64 on Friday to take a two-shot lead after the second round of the John Deere Classic at TPC Deere Run in Silvis, Ill.

Golf // 5 years ago
Three share lead at FedEx St. Jude Classic
Rafa Cabrera Bello of Spain is playing full-time on the PGA Tour for the first time and seems to be getting the hang of it.

Golf // 5 years ago
2017 AT&T Byron Nelson Round 3 Leaderboard: James Hahn (64) reclaims lead at TPC Las Colinas
James Hahn is feeling fine and in a bit of a groove after going low and without a bogey for the second of his three rounds this week at the AT&T Byron Nelson.

Golf // 5 years ago
Genesis Open 2017: 10 picks to win
1. Jordan Spieth, United States -- Coming off a four-stroke victory at Pebble Beach, Spieth has finished in the top 10 in all four events he has played this year and has broken par in each of the 16 rounds he has played. He also repeated as champion of the Australian Open in November and might be on the verge of a run like the one he made in 2015, when he won five times and rose to No. 1 in the Official World Golf Ranking. Spieth will tee it up at Riviera for the fourth time, and even though he has bookend missed cuts, he showed he can play Hogan's Alley when he tied for fourth in his big year of 2015, missing by one stroke the playoff in which James Hahn beat Dustin Johnson and Paul Casey. He had his chance on the 18th hole, nearly chipping in for a birdie that would have given him the victory, but Spieth missed the ensuing six-foot par putt and the playoff by closing with a 70.

It's going to be tough walking around there that many times, but when you're in contention you don't really think about that

David Chad Campbell (born May 31, 1974) is an American professional golfer.

Campbell was born in Andrews, Texas. He was a member of a strong junior college men's golf squad during the years (1992–94) he played at Midland College. He was the conference medalist in 1993, the year that the MC team dominated the Western Junior College Athletic Conference (WJCAC) and won the regional title. In 1994, the Chaps repeated as WJCAC champions and finished second in the National Junior College Athletic Association (NJCAA) championship. That year, Campbell was WJCAC medalist, Region V Tournament medalist and the NJCAA Tournament medalist runner-up. In 1994, he was named an NJCAA All-American. He was listed as the number one player in the final NJCAA national poll. After two years at MC, he won a scholarship and transferred to the University of Nevada-Las Vegas (UNLV). He turned professional in 1996.

FULL ARTICLE AT WIKIPEDIA.ORG
This article is licensed under the GNU Free Documentation License.
It uses material from the Wikipedia article "Chad Campbell."