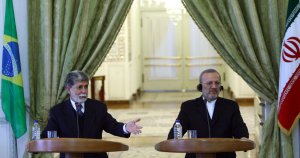 There is a need to inject political energy into the negotiations

If things did happen the way it happened in this case, it could play into the hands of the terrorists

It's a cultural and spiritual promotion, but we also would like to see practical results from the beginning of this historical movement

I have confidence -- and maybe this is just ingenuity on my part -- that we will have a Republican government (in the United States) more multilateral, similar to the government of Bush's father

Celso Luiz Nunes Amorim (born 3 June 1942 in Santos, São Paulo, Brazil) has served as the Foreign Minister of Brazil since 2003. He served a previous term as Foreign Minister from 1993-1995 under President Itamar Franco. Before his current appointment as Foreign Minister by President Luiz Inácio Lula da Silva, Amorim served as Brazil's ambassador to the United Kingdom. On October 7, 2009, Amorim was named the "world's best foreign minister" by Foreign Policy magazine blogger David Rothkopf.

Amorim was born in Santos, São Paulo, on 3 June 1942. He is married to Ana Maria Amorim and has four children: Vicente, Anita, João, and Pedro.

He graduated in Rio Branco Institute, an undergraduate school of international relations run by the Ministry of External Relations of Brazil, in 1965, and obtained his post-graduate degree in International Relations from the Diplomatic Academy of Vienna in 1967.

FULL ARTICLE AT WIKIPEDIA.ORG
This article is licensed under the GNU Free Documentation License.
It uses material from the Wikipedia article "Celso Amorim."
Back to Article
/