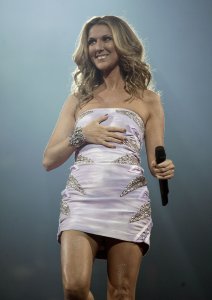 Music // 3 weeks ago
Andrea Bocelli to launch U.S. tour in December
Italian singer Andrea Bocelli will perform in St. Louis, Mo., for the first time during a holiday tour.

TV // 1 month ago
Gaga, Legend sing 'The Prayer' with Dion, Bocelli for 'Together at Home'
Lady Gaga and John Legend joined in on Celine Dion and Andrea Bocelli's performance of their song "The Prayer" during Saturday's "Global Citizen One World: Together" at Home concert.

TV // 1 month ago
What to stream this weekend: 'One World' concert, '#blackAF'
This weekend's streaming options include a new show from "Black-ish" creator Kenya Barris, "#blackAF," and several digital concerts. The "One World Together at Home" event stars Lady Gaga, Elton John and dozens more.

Music // 1 month ago
Hozier to release 'The Parting Glass' as charity single Friday
Hozier will release his rendition of "The Parting Glass" to raise funds for the ISPCC Childline amid the coronavirus pandemic.

Music // 2 months ago
Celine Dion postpones shows due to common cold
Celine Dion rescheduled two dates of her "Courage World Tour" due to illness, but tested negative for coronavirus.

Odd News // 4 months ago
Police officer rescues deer from Kentucky swimming pool
Police in Kentucky came to the rescue of a deer that fell into a swimming pool at a resident's home and was unable to climb out on its own.

I'm really sorry that things couldn't be worked for the concert in Beijing. I was really looking forward to it. I'm excited about visiting the city and appearing on Lan's show. At least I will get a chance to visit Beijing and continue to make plans for a future concert

She's one of the most amazing vocalists alive, her recordings and live performances are flawless

Céline Marie Claudette Dion, CC, OQ (French pronunciation:   ( listen); born March 30, 1968) is a Canadian singer, songwriter, actress, and entrepreneur. Born to a large family from Charlemagne, Quebec Dion emerged as a teen star in the French-speaking world after her manager and future husband René Angélil mortgaged his home to finance her first record. In 1990, she released the English-language album Unison, establishing herself as a viable pop artist in North America and other English-speaking areas of the world.

Dion had first gained international recognition in the 1980s by winning both the 1982 Yamaha World Popular Song Festival and the 1988 Eurovision Song Contest. Following a series of French albums in the early 1980s, she signed on to CBS Records Canada in 1986. During the 1990s, with the help of Angélil, she achieved worldwide fame after signing with Epic Records and releasing several English albums along with additional French albums, becoming one of the most successful artists in pop music history. However, in 1999 at the height of her success, Dion announced a hiatus from entertainment in order to start a family and spend time with her husband, who had been diagnosed with cancer. She returned to the top of pop music in 2002 and signed a three-year (later extended to almost five years) contract to perform nightly in a five-star theatrical show at the Colosseum at Caesars Palace, Las Vegas.

Dion's music has been influenced by genres ranging from rock and R&B to gospel and classical. While her releases have often received mixed critical reception, she is renowned for her technically skilled and powerful vocals. Dion is the best-selling Canadian artist of all time, is the second best-selling female artist in the United States of America during the Nielsen SoundScan era, and is the only female artist to have two singles that have sold more than a million copies in the United Kingdom. In addition, her 1995 album D'eux, is the best-selling French-language album of all time. In 2004, after surpassing 175 million in album sales worldwide, she was presented with the Chopard Diamond Award at the World Music Awards for becoming the best-selling female artist of all time. According to Sony Music Entertainment, Dion has sold over 200 million albums worldwide.

FULL ARTICLE AT WIKIPEDIA.ORG
This article is licensed under the GNU Free Documentation License.
It uses material from the Wikipedia article "Celine Dion."
Back to Article
/