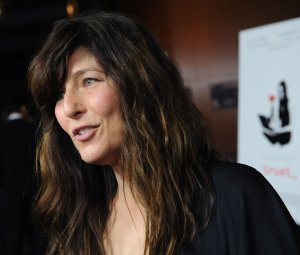 Movies // 1 year ago
'The Croods' live with a modern family in 'A New Age' trailer
The Croods and their prehistoric ways clash with a family who uses more advanced technology in the new trailer for upcoming sequel, "A New Age."

TV // 2 years ago
Anne Hathaway lost equilibrium with bipolar role for 'Modern Love'
Oscar winner Anne Hathaway said playing a bipolar lawyer in Amazon's anthology series "Modern Love" was one of the most difficult experiences of her career.

TV // 3 years ago
Showtime renews Jim Carrey's 'Kidding' for Season 2
Showtime said it has ordered a second season of "Kidding," its comedy featuring Jim Carrey as the star of a children's television program.

Keener, the third of five children, was born in Miami, Florida, the daughter of Evelyn and Jim Keener, a manager of an automotive store. She is of Irish descent on her father's side and of Lebanese descent on her mother's. Her sister Elizabeth is also an actress. Keener attended Immaculate Conception Catholic School in Hialeah, Florida. Although she didn’t get into trouble growing up, by the time she reached high school at Monsignor Edward Pace High School, Keener began rebelliously acting out. She was eventually expelled from the 11th grade, although she later returned to school, and kept her grades up enough to be accepted into college.

She attended Wheaton College, in Norton, Massachusetts where she lived with an aunt in order to save on room and board, feeling out of place among her more privileged peers. Keener majored in English and history, enrolling in a theater course only when she was unable to get into a photography class. Her first theatrical production was the Wendy Wasserstein play, "Uncommon Women and Others," during her Junior year at Wheaton. She took on the character, "Rita."

FULL ARTICLE AT WIKIPEDIA.ORG
This article is licensed under the GNU Free Documentation License.
It uses material from the Wikipedia article "Catherine Keener."