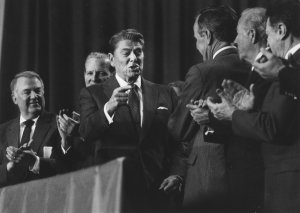 Voices // 1 year ago
Proportionate responses to threats do not work
For one of the few times in his presidency, Donald Trump drew bipartisan support for his last-minute decision not to retaliate against Iran for shooting down a $220 million Navy Global Hawk drone last week.

Opinion // 4 years ago
Harlan Ullman: National security reform must go beyond Pentagon
The Pentagon is fair game for improvement. But don't count on these efforts addressing the dangers to American security to be resolved by focusing there alone.
U.S. News // 6 years ago
Iran-Contra special prosecutor Lawrence Walsh dies at 102
Former New York corporate lawyer Lawrence Walsh, who prosecuted several Reagan-era figures during the Iran-Contra affair, has died. He was 102.
Top News // 1 decade ago
Rumsfeld on way to breaking another record
U.S. Defense Secretary Donald Rumsfeld is on his way to surpassing Robert McNamara as the longest-serving U.S. secretary of Defense.
Top News // 1 decade ago
Former Defense chief Weinberger dies
Former U.S. Defense Secretary Caspar Weinberger, who was pardoned by President George H.W. Bush for his role in Iran-Contra, died Tuesday. He was 88.
Top News // 1 decade ago
N.Y. Senate candidate's résumé examined
The professional résumé of a Republican challenger for the U.S. Senate seat from New York has come under scrutiny.
Business News // 1 decade ago
The Bear's Lair: Crony Capitalism
David Rubenstein, chief executive of the Carlyle Group, outlined Tuesday at an Economic Club of Washington dinner the history and current operations of Carlyle,
Top News // 1 decade ago
Pollard court hearing adjourned
A Washington federal court hearing for convicted spy Jonathan Pollard was adjourned Tuesday, without a decision on his bid to have his life sentenced reduced.
Odd News // 1 decade ago
Analysis: My money is on the generals
French Prime Minister Georges Clemenceau (1841-1929) was once quoted as saying that war is far too important to be left to the generals. Given the enormous impl
Top News // 1 decade ago
Senators told invasion could lead to chaos
Preventing a post-Saddam Hussein Iraq from falling into chaos will require a sustained commitment of thousands of U.S. soldiers and cost billions of dollars for years, Iraqi experts and former administration officials told a Senate panel Thursday.

Caspar Willard "Cap" Weinberger (August 18, 1917 – March 28, 2006), was an American politician, vice president and general counsel of Bechtel Corporation, and Secretary of Defense under President Ronald Reagan from January 21, 1981, until November 23, 1987, making him the third longest-serving defense secretary to date, after Robert McNamara and Donald Rumsfeld. He is also known for his role in the Strategic Defense Initiative and the Iran-Contra Affair.

Weinberger was born in San Francisco, California, the younger of two sons of Herman Weinberger, a Colorado-born lawyer. His mother, the former Cerise Carpenter Hampson, was an accomplished violinist whose parents were immigrants from England. Weinberger was named "Caspar" for a friend of his mother's; his father began calling him "Cap", a nickname that stuck into adulthood.

FULL ARTICLE AT WIKIPEDIA.ORG
This article is licensed under the GNU Free Documentation License.
It uses material from the Wikipedia article "Caspar Weinberger."
Back to Article
/