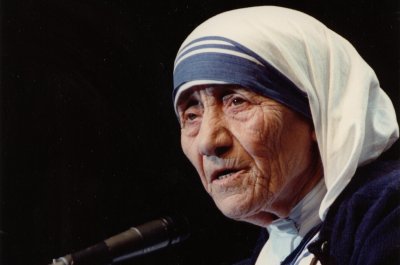 Top News // 3 years ago
The Almanac
On Sept. 5, 1997, Mother Teresa died at age 87. Nineteen years later she was canonized as a saint in the Roman Catholic Church.

Born as Carolina Maria Laraia in Melrose Park, Illinois, Carol Lawrence made her Broadway debut in 1952. She achieved success in the role of Maria in the original Broadway production of West Side Story in 1957, and received a nomination for Tony Award for Best Leading Actress in a Musical for this role. She played the role for two years, and after an appearance in the show Saratoga returned to West Side Story for its 1960 season. Among her other Broadway successes were I Do! I Do! (1967) and Kiss of the Spider Woman (1993-95).

She has played several roles at The Muny in St. Louis, the oldest and largest outdoor theater in the U.S., including Fanny Brice in Funny Girl (1975), Charity in Sweet Charity (1977), and Lucille Early in No, No, Nanette (1990).

FULL ARTICLE AT WIKIPEDIA.ORG
This article is licensed under the GNU Free Documentation License.
It uses material from the Wikipedia article "Carol Lawrence."
Back to Article
/