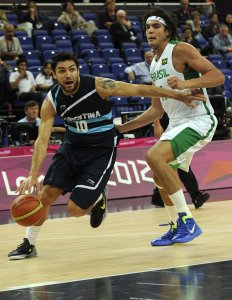 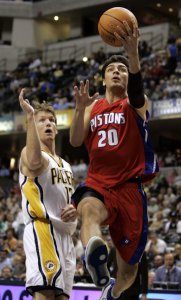 Carlos Francisco Delfino (born August 29, 1982, in Santa Fe, Argentina) is an Argentine professional basketball player. He also has Italian citizenship. Delfino plays at the small forward and shooting guard positions. He stands 1.98 m (6 ft 6 in) tall and weighs 104 kg (230 lb). He is also noted for his defensive skills. He is currently a member of the Milwaukee Bucks.

He began his professional career playing in the Argentine Basketball League for Olimpia de Venado Tuerto in the 1998–99 season, and he then transferred to Unión de Santa Fe in 1999–2000. Delfino moved to Italy in 2000 and played four seasons in the Italian A-1 League, the first two with Reggio Calabria and the other two seasons with Skipper Bologna.

In his first season in Italy, he played for Reggio Calabria. In just under 21 minutes per game he averaged 8.8 points, 2.5 rebounds and 1.9 steals. He scored a season-high 25 points in his second game against Scavolini Pesaro, making five of eight three-point attempts. He scored 15 points in just 20 minutes against Cordivari Roseto and tallied 14 points apiece against Paf Bologna, Muller Verona and Kinder Bologna. He hit at least one three-pointer in 19 of 24 games.

FULL ARTICLE AT WIKIPEDIA.ORG
This article is licensed under the GNU Free Documentation License.
It uses material from the Wikipedia article "Carlos Delfino."