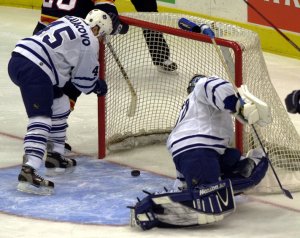 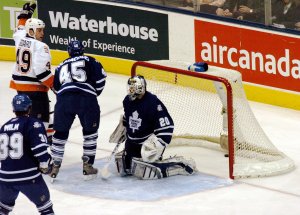 Sports News // 4 years ago
Detroit Red Wings blank Buffalo Sabres
BUFFALO, N.Y. -- After checking to make sure his teeth were in place, rookie standout Dylan Larkin delivered yet again on the ice for the Detroit Red Wings.

Sports News // 4 years ago
Patrick Kane powers Chicago Blackhawks past Buffalo Sabres in shootout
BUFFALO, N.Y. -- Patrick Kane's point streak may be over, but the highlights keep on coming.

Colaiacovo was drafted 17th overall by Toronto in the 2001 NHL Entry Draft. Colaiacovo has been bothered by injuries that have hindered him from becoming an NHL regular, but many still consider him to be a good prospect. He scored his first career NHL goal on November 8, 2005, against the Washington Capitals.

On January 23, 2006, Colaiacovo missed a hipcheck on Václav Varaďa in a game against the Ottawa Senators, smashing head-first into the boards. He was taken off the ice in a stretcher. The injury was a major concussion, and he missed the end of the 2005–06 NHL season.

FULL ARTICLE AT WIKIPEDIA.ORG
This article is licensed under the GNU Free Documentation License.
It uses material from the Wikipedia article "Carlo Colaiacovo."
Back to Article
/