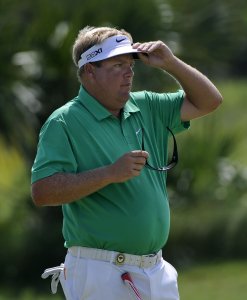 Golf // 4 years ago
2016 Wyndham Championship: High stakes, FedEx spots, bring drama to Greensboro
The stakes are high at the Wyndham Championship, which begins Thursday at the Sedgefield Country Club in Greensboro, N.C., and only part of it has to do with the $1 million winner's share of the $5.6 million purse.

Sports News // 5 years ago
Tiger Woods two back at Wyndham
GREENSBORO, N.C. -- William McGirt, Erik Compton and Tom Hoge share the first-round lead of the Wyndham Championship, but many of the roars were in response to Tiger Woods on Thursday at Sedgefield Country Club.

I felt great on the front nine, then started the back nine with two bogeys

It was nice to play with Miles because he started very well and I hit a couple of loose shots early on, but I kind of got dragged along

Carl Pettersson (born on 29 August 1977) is a Swedish professional golfer.

Pettersson was born in Gothenburg. His father was a Volvo executive who was transferred internationally, so Carl lived in England from ages ten to fourteen and spent his last two high school years at Grimsley High School in Greensboro, North Carolina, in the United States. He went on to attend North Carolina State University.

After he won the European Amateur in 2000, Pettersson turned professional. He won a European Tour card at that year's Qualifying School and played the European Tour in 2001 and 2002, winning the 2002 Algarve Open de Portugal. In late 2002 he won a place on the U.S. based PGA Tour at Qualifying School and he has played mainly in America since then. His first PGA Tour title was the 2005 Chrysler Championship, where he became the third Swede to win on the PGA Tour after Jesper Parnevik and Gabriel Hjertstedt. He has featured in the top fifty of the Official World Golf Rankings.

FULL ARTICLE AT WIKIPEDIA.ORG
This article is licensed under the GNU Free Documentation License.
It uses material from the Wikipedia article "Carl Pettersson."
Back to Article
/