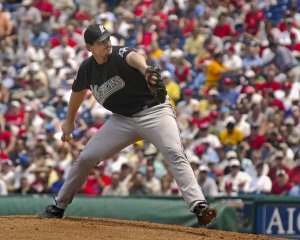 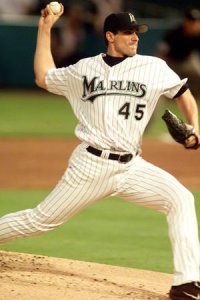 Pavano was selected by the Boston Red Sox in the 13th round of the 1994 amateur draft. He came out of Southington High School located in Southington, CT. In November 1997, he was sent to Montreal, along with pitcher Tony Armas, Jr., in a trade that brought Pedro Martínez to Boston. Pavano debuted with the Expos in 1998 and was traded to the Florida Marlins in the middle of the 2002 season in a trade that included Cliff Floyd. Pavano gave up Mark McGwire's 70th home run in the 1998 season.

Despite having been plagued by injuries, Pavano became an important part of Florida's starting rotation and had a highly successful postseason in 2003 for the World Series-Champion Marlins. He started Game 4 of the Series against the Yankees, holding New York to one run over eight innings in a game the Marlins would go on to win, 4–3, in extra innings.

FULL ARTICLE AT WIKIPEDIA.ORG
This article is licensed under the GNU Free Documentation License.
It uses material from the Wikipedia article "Carl Pavano."
Back to Article
/