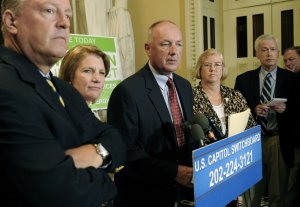 Odd News // 2 years ago
100-foot-long 'fatberg' found in Detroit-area sewer
Officials in a Michigan county said they are hoping a massive "fatberg" found in a suburban Detroit sewer will help change people's behavior.

Energy News // 2 years ago
Michigan tightens screws on pipeline company Enbridge
Michigan has zero tolerance for errors in the network of pipelines crossing its territory, state leaders said in announcing an agreement with Enbridge.

Energy News // 3 years ago
Michigan Republican aims to shut down Enbridge pipeline
A Republican senator from Michigan said he's working through legislative efforts to close down an Enbridge oil pipeline in the Great Lakes.

Energy News // 3 years ago
Enbridge gets an earful over northern Michigan underwater pipeline
Pipeline company Enbridge faced scrutiny over the integrity of a pipeline system in Michigan, though a director said a Mackinac Straits system was sound.

Energy News // 4 years ago
Enbridge weighing its options
Pipeline company Enbridge said spending for 2016 would be significantly lower than in past years, though it maintained it's positioned well in North America.

U.S. News // 4 years ago
Michigan farmers can't find a candidate to rally around
Many Michigan farmers are frustrated with the lack of clarity on their issues, making it hard to commit to a name in the Tuesday's primary.

Candice S. Miller (born May 7, 1954) is a Republican politician from the U.S. state of Michigan, currently representing Michigan's 10th congressional district in the U.S. House of Representatives. The district stretches from the northeastern suburbs of Detroit all the way into the Michigan Thumb.

Miller was born in Detroit and graduated from Lakeshore High School in St. Clair Shores. She attended both Macomb Community College in Warren and Northwood University for Business Management. After several years working in business, she was the youngest trustee to serve on the Harrison Township Board from 1979–1980, and was Harrison Township supervisor from 1980 to 1992. She was treasurer of Macomb County, 1992–1994.

FULL ARTICLE AT WIKIPEDIA.ORG
This article is licensed under the GNU Free Documentation License.
It uses material from the Wikipedia article "Candice Miller."
Back to Article
/