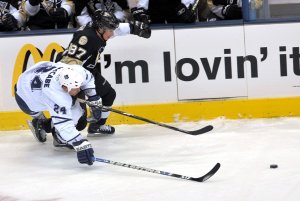 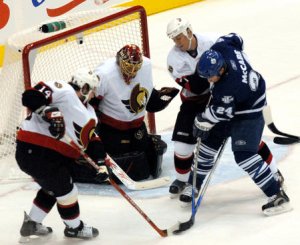 I knew they were probably going to call something, but I didn't think it was going to be a penalty shot

McCabe moved to Calgary, Alberta at a young age and spent the majority of his minor hockey career playing in the Calgary area.

Drafted out of the Western Hockey League (WHL) 40th overall by the New York Islanders in 1993, McCabe competed in the 1995 Memorial Cup and was named to back-to-back WHL First All-Star Teams during his major junior career. He began his NHL career with the Islanders before stints with the Vancouver Canucks and Chicago Blackhawks. In 2000–01, McCabe began a seven-season tenure with the Toronto Maple Leafs, where he played the majority of his career.

FULL ARTICLE AT WIKIPEDIA.ORG
This article is licensed under the GNU Free Documentation License.
It uses material from the Wikipedia article "Bryan McCabe."