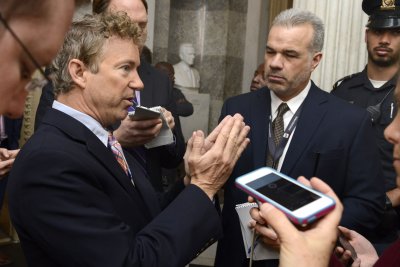 Voices // 4 years ago
U.S. turns up the heat on Islamic State, al-Qaida
A sharp escalation in the United States' largely covert military campaign to cripple the Islamic State has taken a withering toll on the group.

If the safe haven (in Pakistan) is closing ... then the Taliban are in trouble

The Israelis have long believed that Iran is closer than U.S. intelligence believes it is

Bruce Riedel (born c. 1953) is a Senior Fellow in foreign policy at the Saban Center for Middle East Policy of the Brookings Institution, a former CIA Analyst, a counter-terrorism expert, and an author. He retired in 2006 after 29 years with the Central Intelligence Agency. Riedel served as Special Assistant to the President and Senior Director for Near East Affairs on the National Security Council (1997-2002), Deputy Assistant Secretary of Defense for Near East and South Asian Affairs (1995-97), and National Intelligence Officer for Near East and South Asian Affairs at the National Intelligence Council (1993-95). His areas of expertise include counter-terrorism, Arab-Israeli issues, Persian Gulf security and India and Pakistan.

Riedel has a B.A. from Brown, a Masters in Diplomatic History from Harvard, and has studied at the Royal College of Defense Studies in London. He received the Secretary of Defense Distinguished Service Medal in 1997, the Distinguished Intelligence Medal in 2001, and the Department of State Meritorious Honor Award in 2006 for his work in the intelligence and defense community.

He is the author of 'Al Qaeda Strikes Back', which is a study in contemporary counter-terrorism and was published in May/June 2007 edition of Foreign Affairs that focuses on the International terrorist organization al-Qaeda.

FULL ARTICLE AT WIKIPEDIA.ORG
This article is licensed under the GNU Free Documentation License.
It uses material from the Wikipedia article "Bruce Riedel."
Back to Article
/