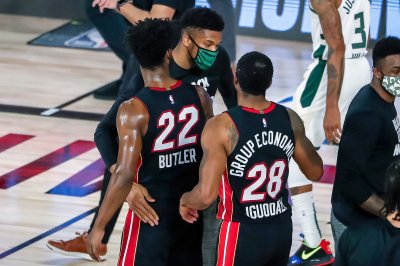 NBA // 2 weeks ago
Miami Heat rally to take 3-0 series lead over Milwaukee Bucks
The Miami Heat used a big fourth quarter to beat the Milwaukee Bucks 115-100 on Friday night, putting the Eastern Conference's No. 1 seed on the brink of elimination.

NBA // 3 weeks ago
Jimmy Butler, Heat hold off Bucks for historic Game 2 win
Jimmy Butler sank two free throws with no time left Wednesday night to give the Miami Heat a 116-114 win over the Milwaukee Bucks and a 2-0 lead in their Eastern Conference semifinal series.

NBA // 3 weeks ago
Jimmy Butler scores 40 to lead Heat over Bucks in series opener
Jimmy Butler exploded for 40 points to guide the Miami Heat to a 115-104 win over the top-seeded Milwaukee Bucks in Game 1 of their Eastern Conference semifinal series Monday night. 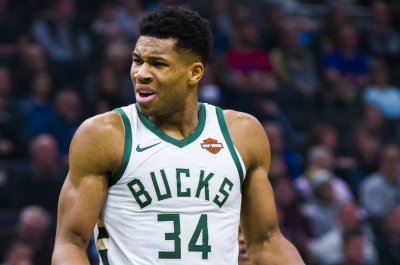 NBA // 6 months ago
Heat hold Giannis to 13 points, beat Bucks with 3-pointers
The Miami Heat made 18 shots from 3-point range and held reigning MVP Giannis Antetokounmpo to a season-low 13 points to shock the NBA-best Milwaukee Bucks in Miami.

Brook Lopez (born April 1, 1988) is a 7'0" American basketball center who plays for the New Jersey Nets of the NBA. He is the twin brother of fellow basketball player Robin Lopez. Lopez was selected 10th overall by the Nets in the 2008 NBA Draft, after playing two years for Stanford in the Pacific-10 Conference of the NCAA.

Brook Lopez was born in North Hollywood, Los Angeles to Deborah Ledford and his now-estranged father Heriberto Lopez, a native of Cuba. He was born into a life of basketball and art, as his grandfather played at the University of Colorado. Lopez moved from Hollywood to Oak Harbor, Washington while in second grade to be near his older brother, Alex, who was playing basketball at the University of Washington at the time. He moved to his current hometown of Fresno, California a year later, where he attended San Joaquin Memorial High School. While there, he played with his twin brother Robin Lopez, as well as Quincy Pondexter, a fellow NBA player for the New Orleans Hornets . Both teammates played with Lopez on their successful AAU team, the Elite Basketball Organization (EBO), along with Derrick Jasper and Tre'Von Willis, both of UNLV.

Both Brook and Robin competed in the 2006 McDonald's All-American Game against several current NBA players including Kevin Durant and Greg Oden.

FULL ARTICLE AT WIKIPEDIA.ORG
This article is licensed under the GNU Free Documentation License.
It uses material from the Wikipedia article "Brook Lopez."
Back to Article
/