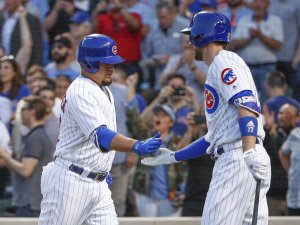 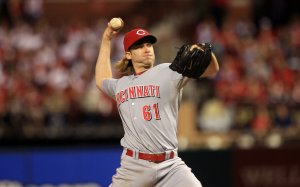 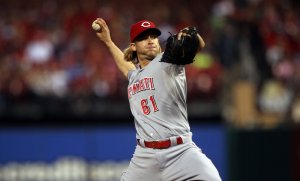 MLB // 4 years ago
Los Angeles Dodgers continue Cincinnati Reds' misery
The Dodgers have one of the best bullpens in baseball, but the Reds pushed them to the brink on Sunday afternoon before Kenley Jansen slammed the door.

MLB // 4 years ago
San Diego Padres' Luis Perdomo beats Cincinnati Reds for first win of season
SAN DIEGO -- Luis Perdomo finally got a win for the Padres Monday night with a lot of help from his teammates.

MLB // 4 years ago
Five-run seventh propels Cincinnati Reds past St. Louis Cardinals
Patrick Kivlehan tried something a little different before his pinch-hit appearance with two runners on and the Cincinnati Reds trailing by three runs.

MLB // 4 years ago
Cincinnati Reds jolt Atlanta Braves in 10 innings
Devin Mesoraco worked before Friday's game with hitting coach Don Long on an adjustment, then lifted the Cincinnati Reds to a 3-2 comeback win over the Braves.

Bronson Anthony Arroyo (born February 24, 1977, in Key West, Florida), is a Major League Baseball right-handed pitcher for the Cincinnati Reds and an aspiring musician. He has previously played for the Pittsburgh Pirates between 2000 and 2002 and Boston Red Sox from 2003 to 2005. Bronson is a Cuban-American and grew up in Brooksville, Florida and pitched for Hernando High School, graduating in 1995.

Signed by the Pittsburgh Pirates in the third round of the 1995 draft, Arroyo made his major league debut with Pittsburgh in 2000. He came to the Boston Red Sox after being selected off waivers before the 2003 season.

On August 10, 2003, Arroyo pitched the fourth nine-inning perfect game in the 121-year history of the International League as the PawSox beat the Buffalo Bisons 7–0 at McCoy Stadium. He needed 101 pitches to throw his masterpiece (73 strikes), struck out nine, and got 10 fly outs and eight ground balls from the Buffalo 27 batters. He went to a three-ball count to just three hitters all game.

FULL ARTICLE AT WIKIPEDIA.ORG
This article is licensed under the GNU Free Documentation License.
It uses material from the Wikipedia article "Bronson Arroyo."