TV // 5 years ago
Holly Madison reveals how Hugh Hefner 'grossed' her out
Holly Madison opened up about her split from Hugh Hefner for an Oprah special amid continued bad feeling with the Playboy founder and Kendra Wilkinson. 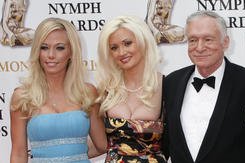 Bridget Christina Marquardt (born Bridget Sandmeier; September 25, 1973) is an American television personality, glamour model, and actress. She is best known for her role on the reality television series The Girls Next Door, which depicts her life as one of Playboy magazine publisher Hugh Hefner's girlfriends. Although Marquardt has modeled for Playboy, as well as having been part of a Playmate search, she has never technically been a Playmate.

Marquardt was born in Tillamook, Oregon after her family moved there from Lodi, California. Shortly after her birth, Marquardt's mother moved the family back to California, where Marquardt was raised. Her parents divorced and when Marquardt was in the fifth grade. Her mother remarried, and Marquardt and her younger brother Edward moved to their stepfather's ranch, where they later gained a half-sister, Anastasia. Marquardt attended Galt High School for her freshman and sophomore years and then transferred to Lodi High School from which she graduated in 1990.

Marquardt graduated from San Joaquin Delta College with an Associate Degree. She matriculated to California State University, Sacramento and graduated in 1998 with a B.A. in communications and an emphasis on public relations. In 2001, she earned her Master's Degree in Communications from the University of the Pacific in Stockton, California. She later took a graduate level course in broadcast journalism through UCLA Extension, which was shown on the first season of The Girls Next Door (most notably when she had to walk out of her first Playboy shoot to attend a class).

FULL ARTICLE AT WIKIPEDIA.ORG
This article is licensed under the GNU Free Documentation License.
It uses material from the Wikipedia article "Bridget Marquardt."
Back to Article
/