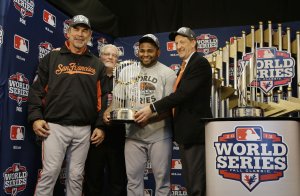 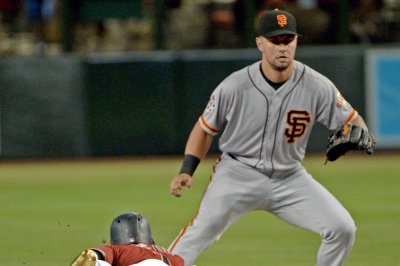 MLB // 2 years ago
San Francisco Giants prepare for 4-game set at Arizona
PHOENIX -- At the trade deadline, Arizona and San Francisco took separate paths toward their common goal -- a berth in the National League playoffs.

Steve Finley is a player that can win games in many ways -- with his bat, his glove and his knowledge

Brian R. Sabean (born July 1, 1956) is the Senior Vice President and General Manager of the San Francisco Giants, a Major League Baseball franchise. He has held the job since 1997, when he replaced former General Manager Bob Quinn. Though some of Sabean's moves have been strongly criticized by Giants fans and the media, the team has had a winning record eight of the twelve seasons he has been General Manager. Prior to his tenure, the team had suffered losing seasons in five out of six years. He is a native of Concord, New Hampshire.

Sabean attended Concord High School and Eckerd College (of St. Petersburg, Florida), playing with former major leaguer Joe Lefebvre on both school's baseball teams. Prior to starting his scouting career, Sabean coached the University of Tampa (D-II) to the NCAA Regional Tournament. He held the job of head coach with UT from 1983 to 1984 - following serving as assistant coach from 1980–1982. Sabean began his involvement in Major League Baseball as a scout, and previously worked in the New York Yankees organization. With the Yankees, he drafted or signed as amateurs the likes of Derek Jeter, Mariano Rivera, J.T. Snow, Jorge Posada and Andy Pettitte. Prior to his appointment to GM in 1996, Sabean served one season as the Giants' senior vice president, player personnel in 1995 after a three-year stint as an assistant to the general manager and vice president of scouting/player personnel.

FULL ARTICLE AT WIKIPEDIA.ORG
This article is licensed under the GNU Free Documentation License.
It uses material from the Wikipedia article "Brian Sabean."
Back to Article
/