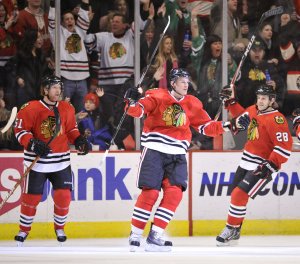 NHL // 5 years ago
Chicago Blackhawks rally for 6-4 win over St. Louis Blues
ST. LOUIS -- The Chicago Blackhawks found themselves playing catch-up hockey for almost the entire game Saturday night -- except when it mattered most.

Brian Wesley Campbell (born May 23, 1979) is a Canadian professional ice hockey defenceman who currently plays for the Chicago Blackhawks of the National Hockey League (NHL).

Brian grew up in Strathroy, Ontario, where he attended elementary school at Colborne Street Public School and high school at both Strathroy District Collegiate Institute and Canterbury High School in Ottawa, Ontario, Canada. His parents are Ed and Lorna. He has two brothers, Craig and Darryl. Darryl also played pro hockey for four seasons in the ECHL, last for the Mississippi Sea Wolves.

Brian received national attention in Canada in 2003, not for playing hockey, but because of SARS. Brian's sister-in-law Vagia, who works at Toronto's Mount Sinai Hospital visited him on March 24, 2003. Shortly after, she started showing SARS symptoms and was subsequently hospitalized. This led to the quarantine of both Brian and then teammate Rhett Warrener. Campbell missed three games before being cleared to play again. Neither player had any SARS symptoms.

FULL ARTICLE AT WIKIPEDIA.ORG
This article is licensed under the GNU Free Documentation License.
It uses material from the Wikipedia article "Brian Campbell."