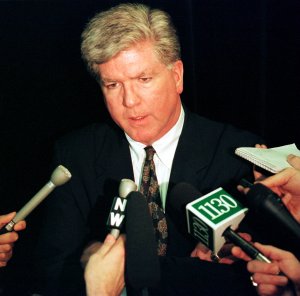 Scott Niedermayer is one of the top defensemen in the game today whose skating, puck-moving ability and leadership qualities make him a great addition to our team

Brian Thomas Burke (born in Perth, 25 February 1947) was Labor premier of Western Australia from 25 February 1983 until his resignation on 25 February 1988. Burke was imprisoned for seven months in 1994, after being convicted of rorting travel expenses.

In following decades, Burke continued to maintain his Labor party contacts and parliamentary influence, using them to further his career as a pro-business lobbyist. Burke worked both sides of politics in partnership with disgraced former ministerial colleague Julian Grill and assisted by former senator, Noel Crichton-Browne, to influence Liberal parliamentarians.

The son of federal Labor parliamentarian Tom Burke, Brian Burke started his career as a journalist, initially at the West Australian newspaper and later in radio and television. He entered politics in 1973, winning the Legislative Assembly seat of Balcatta at a by-election. His elder brother Terry held the seat of Perth from 1968-1987. In 1981, Brian Burke defeated Ron Davies to become opposition leader. At the February 1983 state election, being just 36 years of age, he became the state's 23rd premier (and its third youngest after John Scaddan and Newton Moore), ending almost nine years of conservative coalition government which had commenced under Sir Charles Court, and was completed by Ray O'Connor (1982-1983). On 25 February 1983 the governor commissioned the Burke ministry.

FULL ARTICLE AT WIKIPEDIA.ORG
This article is licensed under the GNU Free Documentation License.
It uses material from the Wikipedia article "Brian Burke."