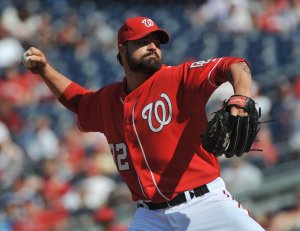 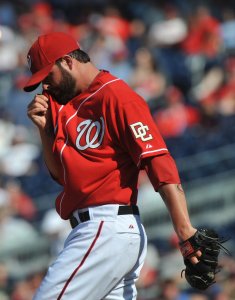 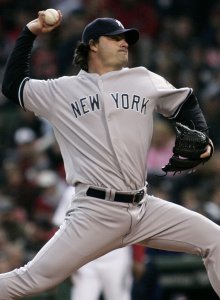 Brian Anthony Bruney (born on February 17, 1982, in Astoria, Oregon) is a Major League Baseball relief pitcher for the Washington Nationals.

Bruney was drafted by the Arizona Diamondbacks after graduating from Warrenton High School in 2000. Bruney pitched in the minors from 2000 to 2003, making his major league debut on May 8, 2004 against the Philadelphia Phillies.

Bruney had a good rookie year with the Diamondbacks, posting a 4.31 ERA and striking out 34 batters in 31.1 innings. In 2005, the Diamondbacks tried Bruney as their closer, and he saved 12 games in 16 opportunities. Overall, the 2005 season turned out to be a poor showing for Bruney. He posted a 7.43 ERA in 46 innings. In May 2006, Bruney was designated for assignment by the Diamondbacks. He was later signed as a minor league free agent by the New York Yankees.

FULL ARTICLE AT WIKIPEDIA.ORG
This article is licensed under the GNU Free Documentation License.
It uses material from the Wikipedia article "Brian Bruney."
Back to Article
/