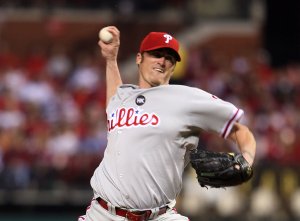 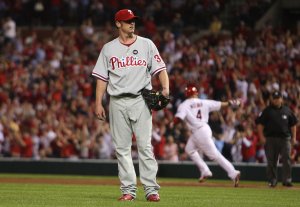 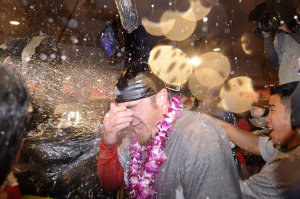 Phillies pitcher may have hip surgery May 28, 2009

If I don't fit their plans, that's fine with me

Brett Allen Myers (born August 17, 1980, in Jacksonville, Florida) is a right-handed pitcher in Major League Baseball who is currently playing for the Houston Astros.

Myers was born and raised in Jacksonville, Florida. As a senior at Englewood High School, he posted an 8–2 record and an 0.80 ERA in 78.0 innings pitched. He was an amateur boxer when he was a teenager. Myers attended Englewood High with Rashean Mathis, cornerback for the Jacksonville Jaguars.

Myers made his major league debut in the summer of 2002, starting on July 24 against the Chicago Cubs at Wrigley Field. He finished his rookie season 4–5 with an earned run average of 4.25, pitching 72 innings. Myers also pitched the 2003 season with the Phillies, posting 14 wins in 32 starts. He threw his first career shutout in June 2003 against the Boston Red Sox.

FULL ARTICLE AT WIKIPEDIA.ORG
This article is licensed under the GNU Free Documentation License.
It uses material from the Wikipedia article "Brett Myers."